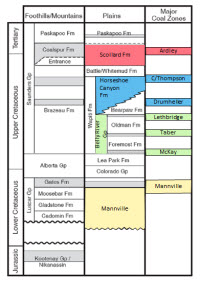 As more and more oil and gas companies search for opportunities in the unconventionals sector, it is becoming increasingly critical to acquire good acreage. Charlotte Elliot, our 2011 Imperial College Petroleum Geoscience MSc student has recently spent a couple of months proving a workflow for doing just this – for the Candian province of Alberta. Her project aims were to identify the best coal bed methane (CBM) acreage based on an analysis of the key coal plays.

Read parts of her abstract below, and download her summary presentation at the end of the blog post…

“The study area lies within the Western Canadian Sedimentary Basin, a massive wedge of sedimentary rock extending from the Rocky Mountains in the west to the Canadian Shield in the east. Generally the stratigraphy contains large coal deposits, from Late Jurassic – Tertiary that accumulated in peat swamps and were consequentially covered by sediment derived from the Laramide and Columbian orogenies.

There are four main coal bearing formations across the area, the Ardley, the Horseshoe Canyon, the Belly River and the Mannville. Within these formations exist a number of plays with varying prospectivity. 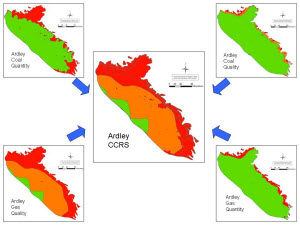 Play fairway mapping (using Exploration Analyst) allowed quick analysis of prospective areas. Utilizing existing ‘proxy’ layers sourced from the Geological Atlas of the Western Canada Sedimentary Basin, new play elements were created; (1) Coal Quality (2) Gas Quality (3) Coal Quantity and (4) Gas Quantity. These elements were turned into CRS and CCRS maps for each play to highlight areas of interest. Results showed that the Drumheller and Ardley plays showed the most potential for CBM production, having areas of 67,500 km² and 34,800 km² respectively within a zone of low-medium risk. 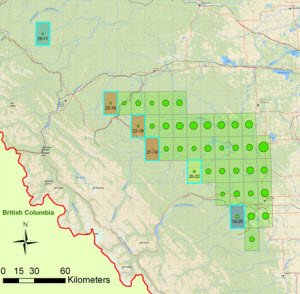 Further analysis produced a block ranking. As no official lease data was available for the area, an arbitrary grid was created instead. The blocks were scored according to the presence of plays within the block and their average GIP. Existing wells were examined to see how developed the areas were. Finally six blocks were identified in a northwest – southeast linear arrangement at the base of the foothills. These blocks may warrant further investigation for CBM production.”

For a summary of the project’s methodology and results, download Charlotte’s MSc presentation (requires site login or registration).