The annual European Petroleum GIS Conference was held on 1-2 November in London, UK, organised by Esri and the European chapter of the Petroleum User Group (PUG).

Against a backdrop of cautious industry optimism – the oil price had just broken though $60 for the first time in 2 years – there was strong turnout on both days of the conference. Representing nearly 100 organisations, more than 200 delegates from 19 countries came together to learn about the latest GIS trends, find inspiration from user presentations, and meet old and new friends.

Multiple presentation tracks covered the wide and varied nature of GIS and spatial data in Oil, Gas and Renewables. Reflecting on the conference, there were a number of themes that stood out:

This conference was in stark contrast to previous years when people still debated the merits (or not) of the cloud, and whether it will ever be fit-for-purpose for the demanding security and performance requirements of our industry. Now, with even big names like Shell, BP and Woodside having announced plans to move to the cloud, that debate is clearly over.

This was also evident on stage where even live demos of ArcGIS Pro, Esri’s flagship desktop GIS, were actually run on the Amazon cloud using Apple Mac terminals. This was complemented by ArcGIS Online web content, as well as smartphone-based workflows for field mobility.

If anyone still doubted the ability of ArcGIS to run cross-platform, they were surely won over by such displays. Not only does the cloud enable instant processing of millions of records, it also eliminates many issues around technology compatibility and data synchronisation. 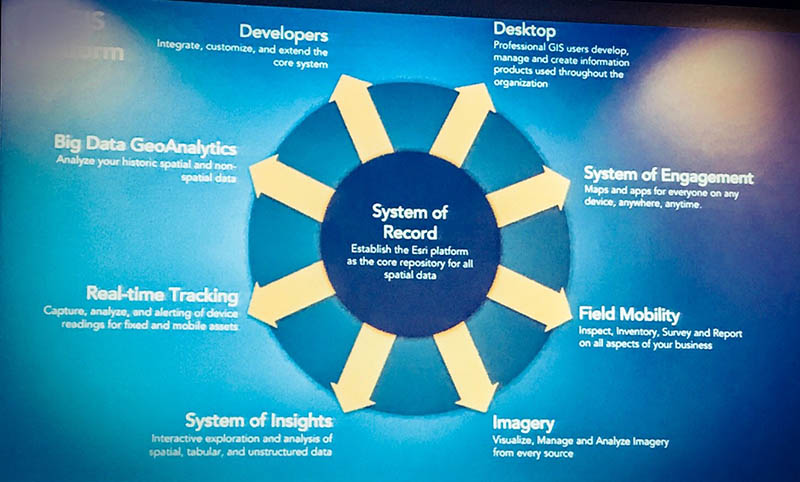 Esri’s vision of GIS as a system of record, and everything that spawns from it

The ever-growing list of apps to support cloud-enabled and mobile workflows may be baffling but, as Esri’s Jeff Shaner commented, “what you don’t want is for mobile apps to replicate the desktop.” With the focus on usability and performance, it is far more preferable to ‘appify’ workflows one use-case at a time – especially since this can now be done with off-the-shelf templates requiring minimal or no customisation.

As part of Esri’s plenary presentation Chris Jepps demoed the merits of ArcGIS Pro with Exprodat’s very own Exploration Analyst extension. Using staple play-based exploration analytics such as field size distributions and creaming curves, Chris was able to show off ArcGIS Pro’s 64-bit enabled features, slicing and dicing through complex data with ease, and highlighting features from the chart on the map and vice-versa. Chris commented that ‘Pro’ looks and feels very different from ArcMap, but once used to it you won’t look back. 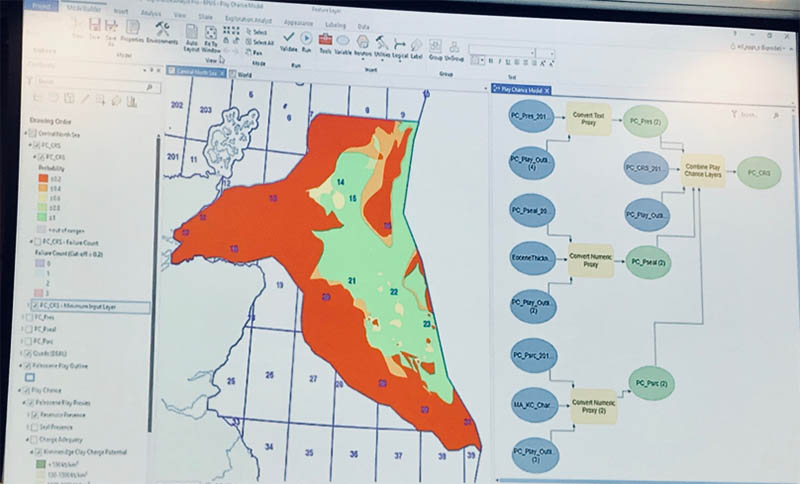 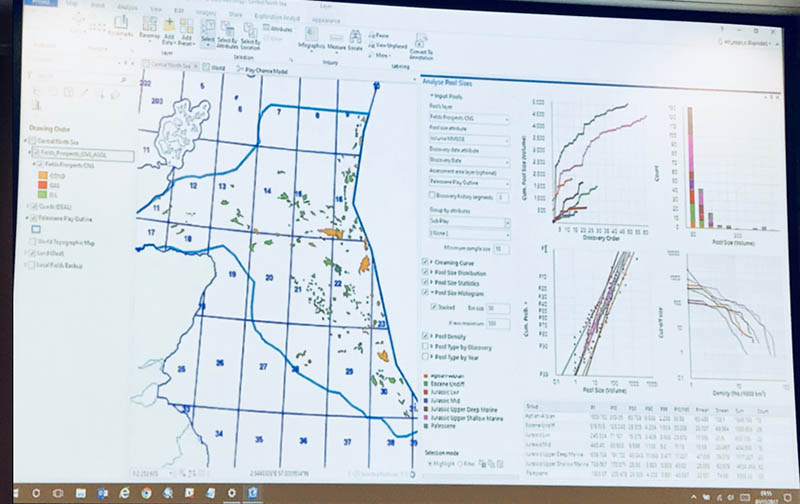 ArcGIS Pro is a slick and responsive application fully integrated with 3D and Web-GIS, enabling seamless publishing and consumption of online content. And thanks to the ability of Pro to run in the cloud with Desktop as a Service (DaaS), hardware limitations are no longer a problem either.

While ArcGIS Pro is set to consign ArcMap to a well-earnt retirement, some members in the audience still highlighted one final hurdle preventing immediate migration: the dependency on ArcMap extensions, often built in-house or by third parties. This is a critical issue which GIS developers across the industry will need to address. But, as Chris demonstrated with Exploration Analyst, it’s also an opportunity to refresh and streamline workflows – the results are certainly worth it (see here for further information on migrating to ArcGIS Pro).

BP and Woodside provided the user keynote presentations on the first day. While they were both impressive from a technical and organisational point of view, what stood out was how both companies have succeeded in opening up GIS to a wide audience far beyond the usual geospatial crowd.

BP is nearing 10,000 users with its global OneMap portal, supported by a remarkably open approach that lets every one of BP’s 70,000 employees create and share data on the portal, or even build Story Maps and apps with widgets from Web App Builder. This move to let anyone publish data and apps on OneMap was initially driven by resource constraints (the global GIS team comprises just a handful of people), but the loosening of controls has resulted in levels of uptake that other companies can only dream of – there is surely a lesson here.

Woodside talked about their integration between ArcGIS and its cognitive system (although the speaker didn’t mention it by name, it’s widely known to be based on IBM Watson). This integration represents a symbiotic relationship where ArcGIS provides location intelligence to the cognitive system, which is turn offers ArcGIS a rich set of attributes drawn from databases and documents going back over 30 years. Any Woodside employee can now type in a simple text query – say, bike incidents at a particular production plant – upon which the results will be presented in a variety of text and chart formats, including a heat map enabling the immediate pinpointing of hotspots. As in BP’s case, this is an example of “lighting up the whole organisation”. Through a deceptively simple text search box, Woodside has effectively turned is entire workforce into GIS users.

The move to the cloud makes a lot of sense, of course, but will also bring its own set of challenges. In the final conference Q&A session some delegates reported issues with keeping on-premise and cloud-based systems in sync during the migration phase. Others raised concerns about the interoperability of vendor solutions using different cloud providers. And many people quoted IT security and firewall issues as the main obstacle to integrated field mobility with smartphone apps.

In theory, once everything is in the cloud, APIs and web services should make interoperability easier than ever before. In practice, however, it seems that integration will remain a challenge – indeed, in our own industry GIS benchmarks it is quoted as the number 1 issue.

Whatever the case, it looks like we’re headed back to a world of mainframe computing where all the heavy processing is handled by servers – even the desktop applications themselves. In our industry this may pose challenges in remote or low-bandwidth regions but, as a presentation from CGG-NPA showed, there are now so many new satellites going into orbit that fast broadband anywhere on the planet is surely just a matter of time. On the remote sensing front we are already close to mapping the entire Earth on a daily basis at 3-5 metres resolution – and good luck to anyone who tries to process this data on a local PC!

An open floor discussion highlighted a number of skills that will be vital in this new world. Although nobody in the audience expected to have their jobs replaced by robots anytime soon, automation is seen by many as a critical skill. This will require solid competencies in FME and Python, as well as a good understanding of IT architecture. Automation is not only essential for integrating systems or processing large volumes of data, it’s also the only way of making analytics a viable proposition – manual data preparation just takes too much time.

In terms of delivering solutions, the ability to work in agile ways was also acknowledged as being increasingly important. Although some IT programmes will always require a degree of sequential planning, in a rapidly changing world no one can afford to wait months for a solution. The key lies in delivering minimum viable products as quickly as possible, using an iterative and time-boxed approach that closely involves the end user in prototyping and design. This is, of course, the well-known method of agile development. Woodside’s cognitive system and ArcGIS integration was delivered using Agile, which reduced typical development cycles from 6 months to 6 weeks.

Also, we should not forget that our skills are transferrable to other sectors. This was illustrated by a talk given by Statoil, who are heavily investing in wind energy. Decades of offshore experience derived from oil and gas operations are now paying off in the renewable sector. What’s more, the footprints of offshore wind farms are far bigger than those of hydrocarbon platforms, requiring more spatial data – and expertise.

Finally, one of the more thought-provoking presentations was given by the International Association of Oil and Gas Producers (IOGP), regarding the issue of “dynamic” coordinate systems. Well-known reference frames such as WGS84 are now so old that continental drift can introduce coordinate shifts significant enough to cause serious issues when mixing new with old data. The speaker gave one example where a new bridge did not fit between two platforms because they were each surveyed many years apart. A simple laser device or tape measure would have avoided the issue, but because both ends were positioned with GPS over 10 years apart, the movement of the tectonic plate versus WGS84 caused the coordinates of the later measurement to be offset by about 30 cm, exceeding the engineering tolerance of the bridge. IOGP are preparing a guidance note on the matter, due to be published in early 2018. You have been warned! 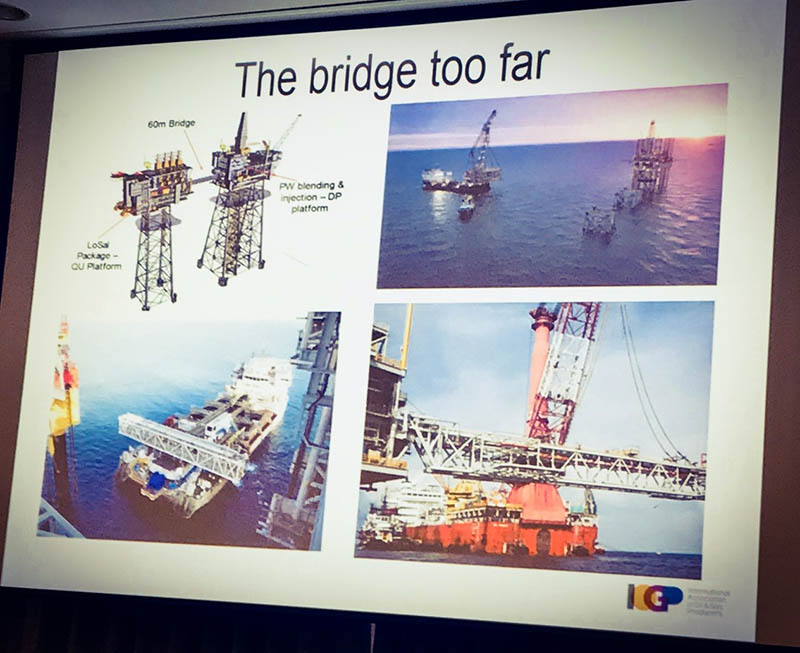 When geodesy and tectonics play havoc with distances…

The petroleum industry is undergoing a slow recovery. GIS, along with everything else, is moving to the cloud. As illustrated by talks and discussions at this year’s conference, now is the time to refresh your geospatial strategy and workflows.

Our industry needs to let go of outdated models and embrace new ways of working that widen the impact of GIS far beyond our traditional user base. This will help transform our businesses – simplify processes, reduce costs, and provide new insights.

There were many presentations that demonstrated the transformative impact of ArcGIS on our industry, from global portals and cognitive systems to maps and apps attracting overseas investment to national energy sectors in the UK, Norway or Sierra Leone; as well as ArcGIS optimising exploration and pipeline management workflows.

The ArcGIS platform, deployed in the right way, will enable business users to satisfy most of their own needs themselves – meaning GIS professionals have more time to invest in providing core reference data, analytics and vital infrastructure and integrations. As well as keeping an eye on those moving coordinates.

This requires further skills in automation and IT architecture, together with the ability to work in agile ways – short, iterative sprints delivering visible results quickly. And to top it off, many of our existing skills are transferrable to related domains such as wind energy.

So – what are you waiting for?