Exprodat Team Race the Sun and Nearly Beat It! 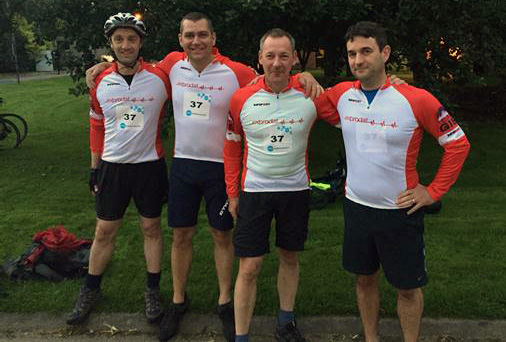 Exprodat, the oil and gas ArcGIS platform specialist, Esri Gold Partner and Getech group company, has always made it part of the company ethos to support their staff in pursuing extra-curricular activities and raising money for worthy causes.

So once again, an intrepid team of four Exprodaters set out to raise money for the charity, Action Medical Research for Children in what would prove to be their toughest test yet.
Following a long and hazourdous trip north navigating bridges which were either too low or too weak, the team arrived in Penrith, just outside the Lake District National Park. An evening of nutrition and rehydration – a curry and beers – was curtailed by a 5am start the next morning for the first leg of the race; a 24 mile cycle to the foot of mount Helvellyn.

Once completed the team started upon the 950 metre ascent of one of Scarfell Pike’s foothills in weather that would have been challenging for amphibians. Once at the top they were rewarded with a magnificent view of nothing at all before they periously slid down a rocky and muddy path back to the bottom and their bikes.

If they thought they could rest they were wrong; a short ride later and they were paired off into two kayaks and proceeded to paddle for a back breaking three kilometres. By now it didn’t make much difference if our four adventurers were in the boats or in the lake and the final 25 mile cycle ride to the finish had the added danger of possible drowning in what was quite appalling rain.

But, eleven hours and twenty minutes after they had set out, Gareth Smith, Ross Smail, Adrian Birch and Danny Thompson crossed the finishing line in a highly creditable 34th place with aching bones, a touch of hypothermia and memories to last a life time. They had also raised over £2,500 which will go to changing the lives of children for the better.

Exprodat’s Director of GIS Consulting Gareth Smith remembers the race; “We try and do something like this every year, but this was was probably one of the toughest! A combination of advancing years and torrential rain took its toll on us. Still, when you see the work that Action Medical Reasearch do for sick children, any discomfort we felt paled in to insignificance compared to what those kids, and their families, go through. Many thanks to everyone that sponsored us – your money is going to a great cause”.