ArcGIS Pro has, with the recent release of version 2.0, become the new industry standard for desktop GIS. It’s a slick and responsive 64-bit multi-threaded application offering a modern user experience; powerful processing and visualisation options; and full integration with Esri’s web-GIS platform. ‘Pro’ will replace its trusty and longstanding predecessor, ArcMap, in the near future. If you haven’t looked at Pro, now is the time to get started.

Why bother with geodetic integrity?

Once you’ve acquainted yourself with the basics of Pro, understanding how it handles coordinate systems should be one of your first priorities. The energy and natural resources sectors are particularly dependent on geodetic integrity, as they routinely have to deal with many map projections and datums around the world. Geology famously doesn’t stop at borders, but coordinate systems often do – or worse, they shift them. And the consequences of getting it wrong can be dire.

This blog focusses on the basics of map projections and horizontal datums in ArcGIS Pro, including one particular issue that often trips people up: datum transformations. Read on!

Before we start, a quick word on terminology. Esri uses the terms coordinate system and spatial reference interchangeably. Industry bodies such as EPSG and IOGP tend to prefer coordinate reference system or CRS. For the sake of brevity we shall use CRS for the remainder of this post.

A CRS is basically a defined method for representing the real world on a map. It always includes a geographic system, which defines latitude and longitude on a particular datum, and a projected system, which controls how our spherical 3D planet is represented on a flat 2D map.

In ArcGIS Pro the default CRS is set in the Project tab under Options > Application > Maps and Scene > Spatial Reference: 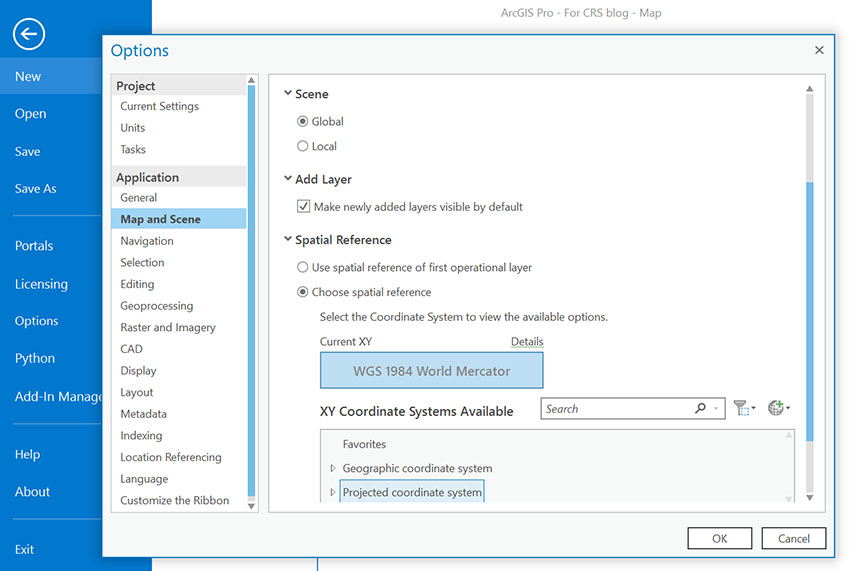 Here you have the option of simply adopting the CRS from the first layer you add to a map – not including the basemap – as the default (Use spatial reference of first operational layer). Alternatively you can set a universal default with Choose spatial reference. This lets you specify the desired geographic and projected coordinate systems from a long list of preconfigured systems. If you’re feeling brave you can also import or create a new CRS from scratch, but we’d strongly advise against this unless you’re a geodetic expert.

CRS properties of maps and layers

In the map’s Contents pane you can review and, if necessary, change the display CRS of the map (effectively overriding the default above). Right-click on the Map header and go to Properties > Coordinate Systems, where you get the same choice of geographic and projected systems as above: 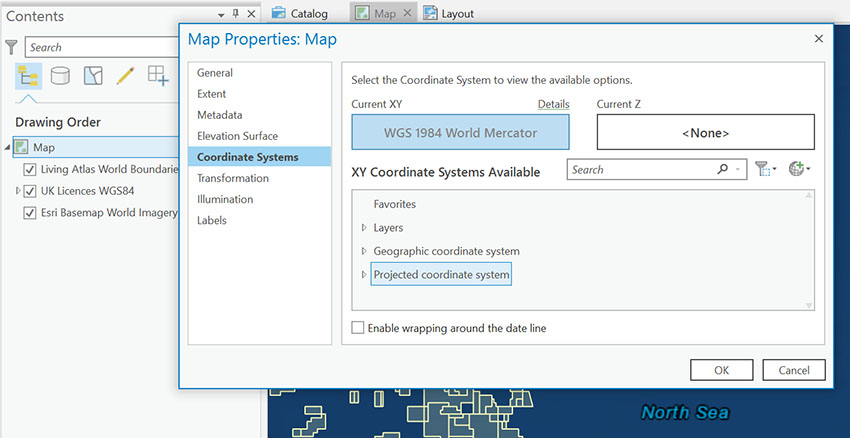 In the Contents pane you can also right-click on individual map layers and go to Properties > Source > Spatial Reference. This tells you the original CRS of that particular layer, without the ability to change it – it’s just telling you the CRS in which the raw data is stored. 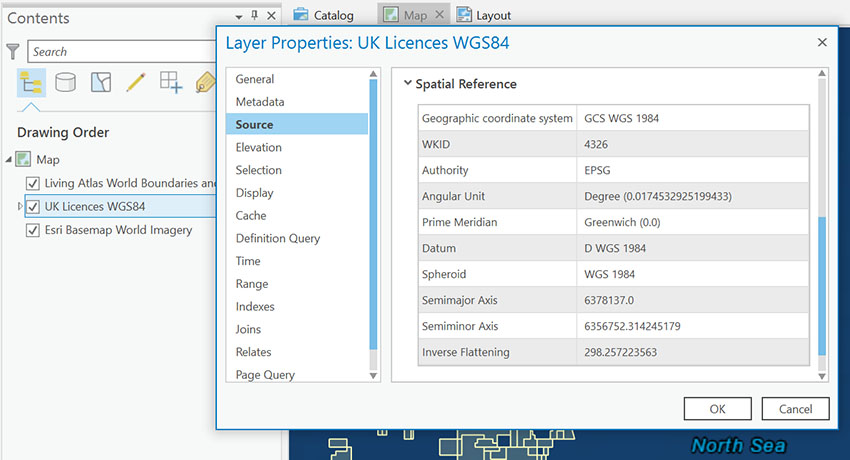 Note: The layer CRS may be different from the map CRS, in which case ArcGIS Pro may be transforming or reprojecting it on the fly in your current map window. Which is where the fun begins…

As you (should) know, not all latitudes and longitudes are equal – they depend on the datum they relate to. This, for example, explains why tourists in London are always bemused when they stand on the Greenwich Prime Meridian and their GPS won’t show 0° longitude. It’s because the line marked on the ground is based on an older, historical datum: 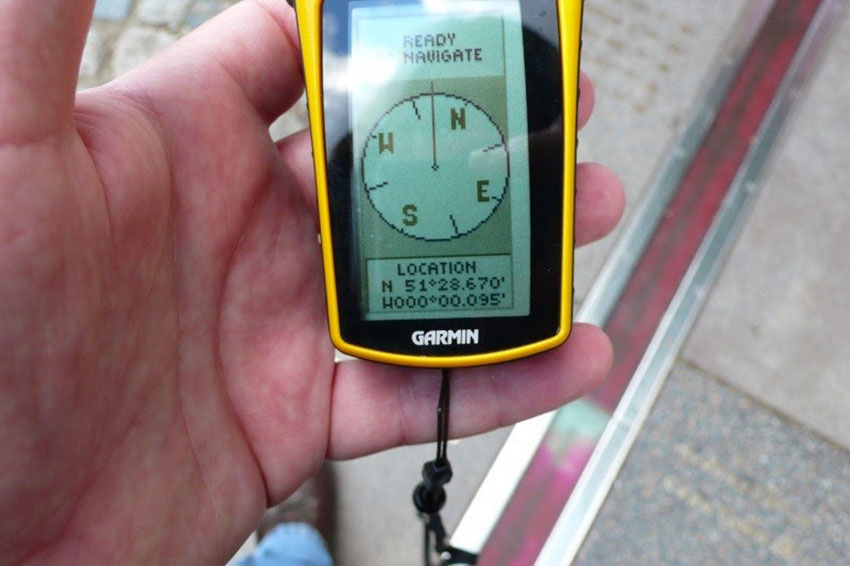 In the same vein, datums pose a great danger to the unwary GIS user. What happens when you load layers with different datums into the same map? Will ArcGIS Pro ‘reproject’ these layers? Or, to be precise, transform the datums of these layers?

The answer is, it depends!

What happens: step by step

Let’s take the example of UK licence blocks (source: OGA). In the screenshot below, the map display, basemap and licence layer are all based on WGS84, projected in World Mercator. So far, so good: 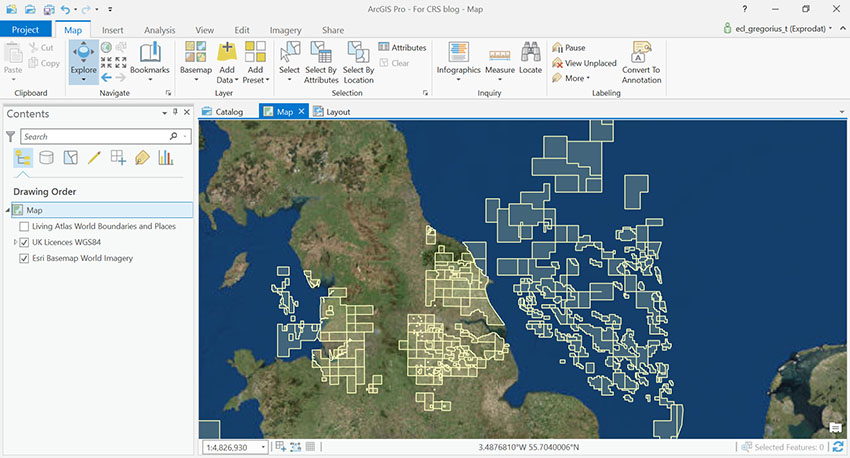 Now let’s add the same licence layer again – except this time the layer is defined in ED50, a European datum still used around the North Sea. In ED50 the licence blocks are obviously the same but their values of latitude and longitude are slightly shifted to take into account the different shape and orientation of ED50. The screenshot below shows the two licence layers superimposed with semi-transparent symbology, one referenced to WGS84, the other to ED50. 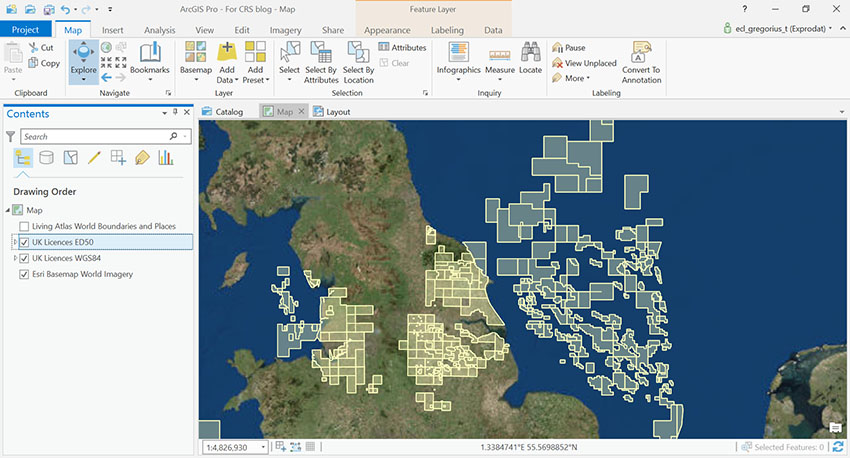 Let’s zoom in a little… 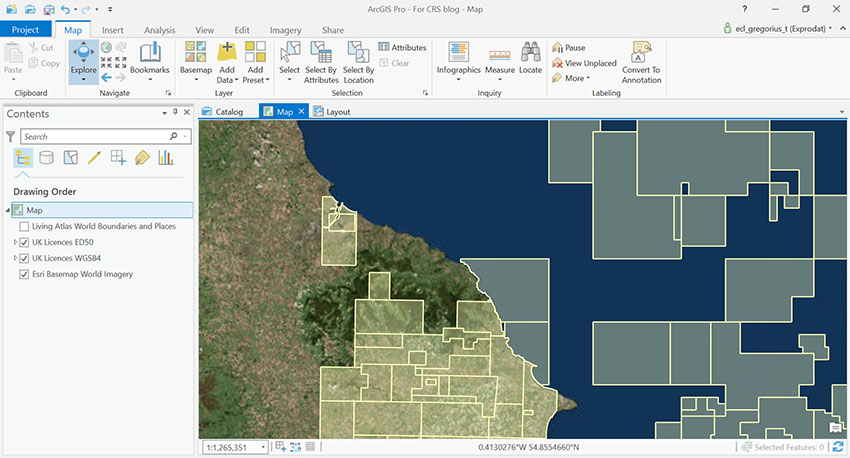 And a bit further… 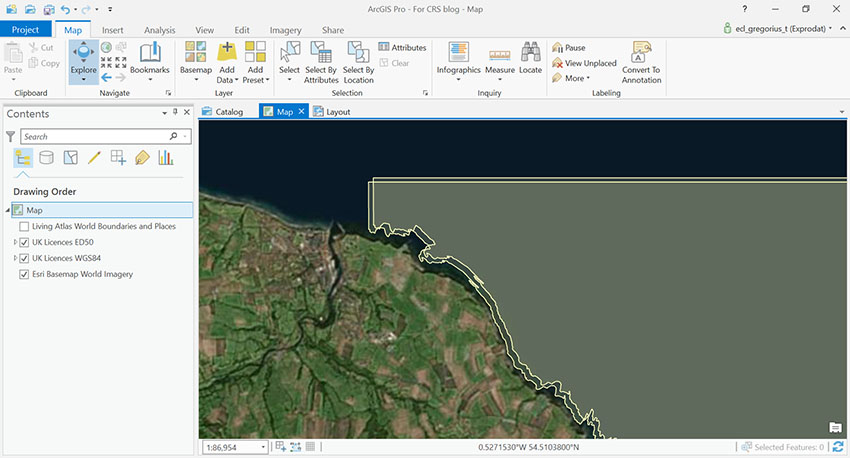 That’s right… ArcGIS Pro simply loaded the ED50 layer into the map as if it were defined in WGS84 – without transforming it on the fly. As a result, the ED50 layer is now out of place by about 130 metres: 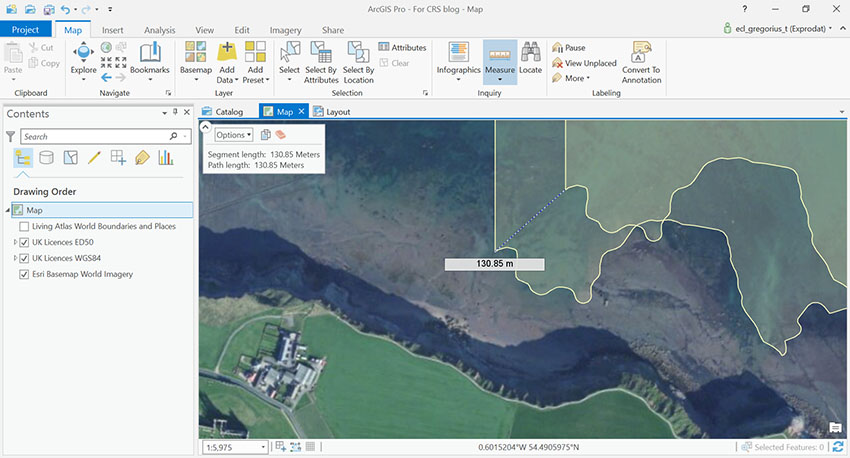 Would you have noticed this mistake if it hadn’t been two identical layers? Probably not. So imagine, for example, the consequences of shifting a wells layer in this way prior to export to geoscience software, or misaligning offshore anchor points for a planned rig move in the vicinity of pipelines. Not good!

How to avoid disaster

So why didn’t we get a warning when adding layers with different datums? Because the warning was switched off, by default!

BEFORE YOU DO ANYTHING IN ARCGIS PRO, SWITCH ON THIS WARNING.

To do this, go back to the Project tab under Options > Application > Maps and Scene > Spatial Reference. If you scroll to the very bottom there’s an option to Warn if transformation between geographic coordinate systems is required to align sources correctly. Make sure this box is always ticked: 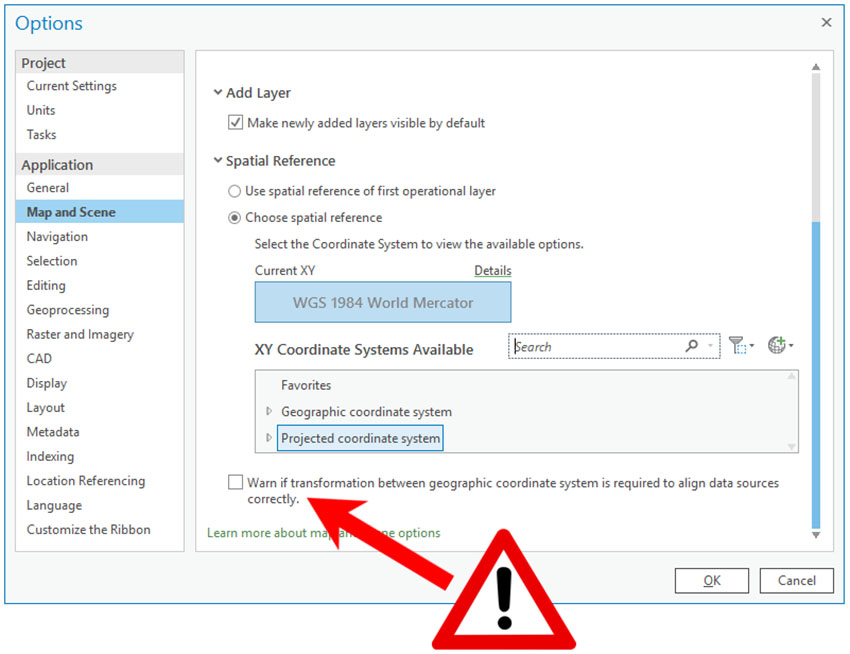 With this warning enabled we will be presented with a transformation alert every time we add a layer with a different datum. In our example, adding an ED50 layer to the WGS84-referenced map produces the following prompt: 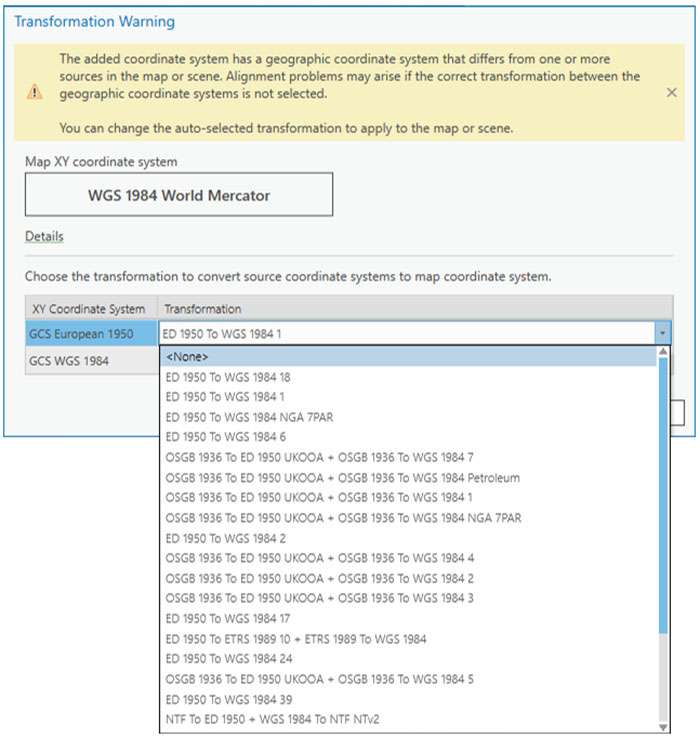 OK, this also poses a new problem… if there are multiple transformations available, which one to pick?
Although any transformation is usually still better than none, choosing the right transformation will often require advice from a geodetic expert. Esri help here by presenting the list ordered by ‘most suitable’. This ordering isn’t always perfect, but in our example the first transformation on the pull-down list is indeed the right one. Once this transformation is enabled the two layers align perfectly: 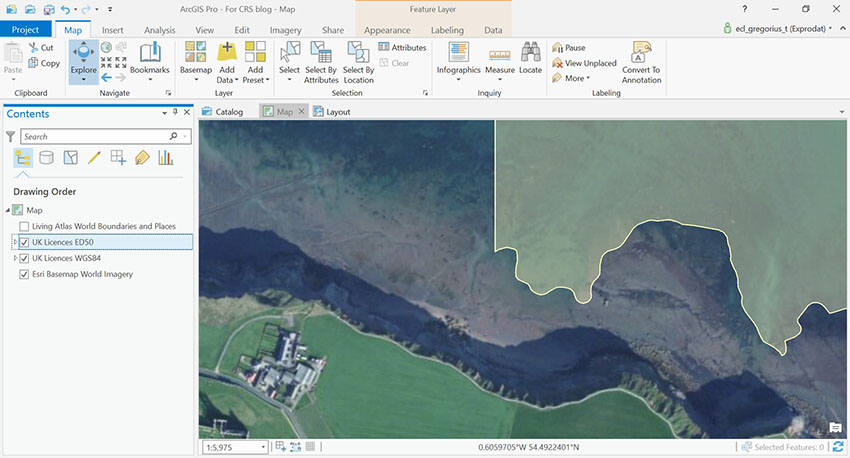 We hope this provided a useful introduction to the handling of coordinate systems in ArcGIS Pro. Before you do anything else – and this has always been the case with ArcMap as well – be sure to switch on the Transformation Warning. And if you’re unsure about datum transformations, consult a geodetic expert.

For further information read this blog or drop us a line.

Why Use GIS in Petroleum?