GIS: A Cure for Confirmation Bias?

Confirmation Bias: a tendency of people to favour information that confirms their beliefs or hypotheses: Wikipedia*.

It’s a terrible disease for the petroleum explorer. Succumbing to confirmation bias often leads to overconfidence in one’s ability to predict outcomes, technical risk underestimation and poor decision making. Wishful thinking syndrome is also a common side effect, and the affected often tend to herd together. Do you know someone you work with that suffers from these symptoms? We may be able to help! 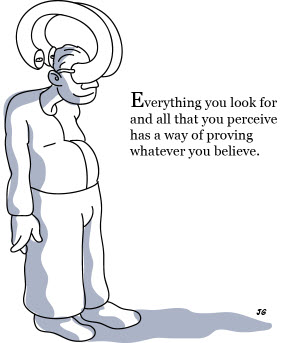 I’ve always believed that the best geoscientists are ones that are aware of this trait, and consciously attempt to address it. One of the key root causes is our inability to process large volumes of information; we tend to quickly sift out and discard the stuff that’s contradictory or difficult to reconcile with our working hypotheses. How often have you heard someone say “I prefer vendor A’s data in this area because it’s ‘better’?”

Do they really mean ‘better’ in a scientific sense, or do they mean it matches their models more closely than other data might?

This is where GIS has a crucial role to play in petroleum exploration. There’s no other tool that allows you to integrate so many disparate sources of information in one place, and make some sense of it: 1, 10, 100 information sources, GIS takes it all in its stride and allows us to analyse relationships and patterns graphically, intuitively, in a spatial environment. So that takes care of the issue around processing large volumes of information. Or at least, that’s the way it should work.

We have an application called Exploration Analyst. One of the modules is for acreage analysis and ranking. It lets you choose multiple criteria and quantitatively ‘score’ and rank acreage based on them. This could include things like depth to reservoir, distance to facilities, presence of particular plays, prospect volumes, water depth and so on – basically any decision criteria that can be mapped (which is most of them). 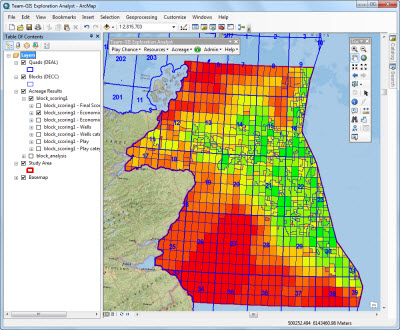 The idea is you generate these models, test your preconceptions and existing hypotheses based on all the data available to you, and correlate your ‘gut feel’ and experience with hard information.

Example scenario: our quantitative ranking shows a block as ‘red’, but we thought it was ‘green’ – so why is that? Review, dive down in to the data in GIS and evaluate the cause. Ah! Our GDE maps are out, new well data has increased the reservoir risk around the block, so the model is updated and we’re off again.

Great! No more subjective decision making when you’re filtering your blocks for the next licensing round! No more waiting for the old timer in the corner to point the gnarled finger at a map and say ‘apply for that one’, and hope he’s right! We get consistency in analysis across the company, technical risk is understood and great exploration results will surely follow.

Well, as it turns out, what we often see is something quite different. The tool is used, but to confirm and support decisions at the end of the process, rather than inform and challenge existing models at the start. Even with all the information available, and a way of making sense of it, the confirmation bias is still at work.

But guess what? The best geoscientists we work with and the companies that seem to be most successful are the ones that work the other way. They use GIS to embrace information, develop and test new exploration models, challenge existing hypotheses, then calibrate those with experience.

It’s a tougher path to follow, but it’s the one that leads to new insights and ultimately should improve exploration performance.

So the next time you sit in a meeting and see someone present a bid proposal or farm-in recommendation, think about the confirmation bias and question what’s been done to address it.