In my last blog on the value of spatial analysis, I promised some examples showcasing the use of analytics for “Big Data” in the O&G and GIS space. To kick this off I thought it would be a good idea to summarise the results of a research project we recently carried out in collaboration with CLIMsystems Ltd.

These results were presented at the recent Esri Petroleum GIS Conference in Houston. The presentation is publicly available, in case you missed our talk and are interested in seeing the details.

Our aim with this project was twofold:

One of the key components of O&G operations planning and execution in the Arctic is the management of sea ice. This is a complex task and one that presents a number of challenges. Predicting sea ice extent is important when planning exploration and oil spill response efforts.

An ice management strategy usually includes components such as weather forecasts, iceberg detection and mapping the extent and thickness of the sea ice. The strategy is supported by the acquisition of a large amount of data, including satellite imagery (for detection of large icebergs and ice features embedded within packed ice), real-time ground information, historical observations (extent of first-year and multi-year sea ice and its thickness).

Because of the significant changes that the sea ice has experienced since the early 2000s, predicting when the sea is free from packed ice is becoming more and more difficult and reliability of the historical data analysis is diminished by the effect of changing climatic patterns. In this context the “usual” approach of forecasting the sea ice extent based on historical data only may lead to unreliable results.

We partnered with climate change scientists from CLIMsystems Ltd, a consultancy company based in New Zealand specialising in climatic modelling, to produce a proof of concept around the West Greenland-East Canada (W Greenland) and East Greenland Rift (E Greenland) basins (see ma

p below). This region was selected mainly because of recent licencing activity and the renewed interest from the Government of Greenland on O&G resources. 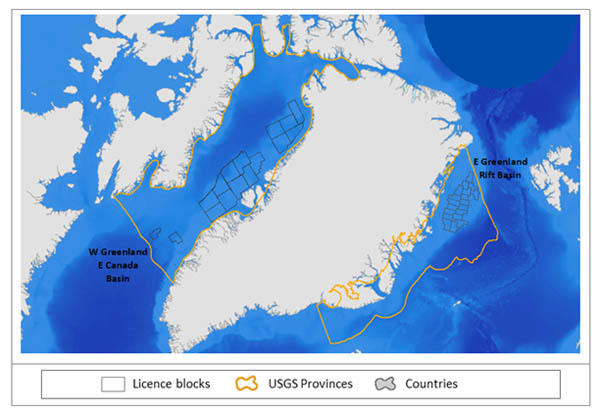 The idea was to use spatial analytics tools in ArcGIS to combine historical sea ice analysis with projected climate change scenarios for short-term (operational window of summer 2014) and long-term perspectives. The historical analysis was based on publicly available large datasets derived from satellite and ground-based observations: sea-ice extent and thickness variation, sea temperature, ice flow velocity and wave height. For the climatic modelling, CLIMsystems used vast climate databases such as CMIP5 (IPCC AR5) GCM and Polar-CORDEX, whose data was fed into climate change long-term projections models. CFSv2 data was used to examine the seasonal aspects (one to three months).

Historical sea ice extent data for the W and E Greenland basins shows that sea ice conditions in the region have changed substantially in the last decades, and especially since the beginning of the new century. The historical analysis highlighted the main features indicated below. 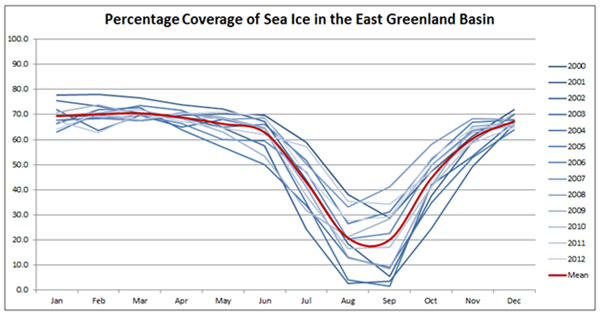 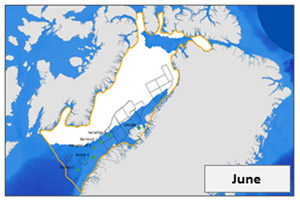 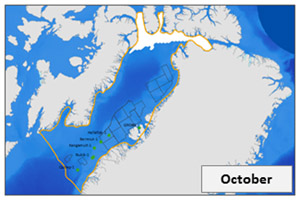 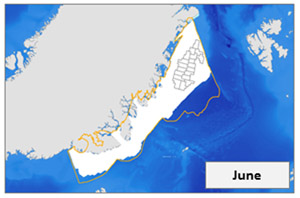 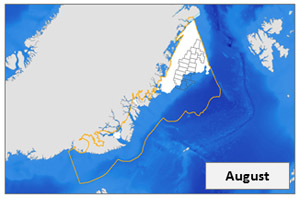 For the climate modelling a limited number of scenarios were developed using input datasets described above. The results of the seasonal and longer term climate modelling of sea ice conditions are summarised below.

It is interesting to note that the short term projections for the early part of the summer 2014 indicated an increase in the extent of the sea ice coverage for both the E and W Greenland basins compared to the average. This projection has been confirmed by NOAA climate model forecast for the Arctic region as recently as May 2014. 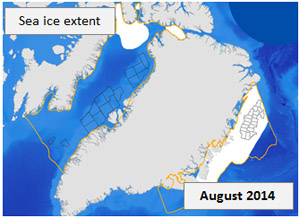 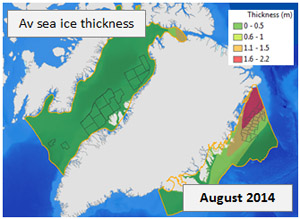 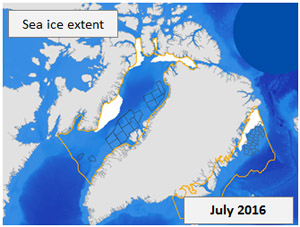 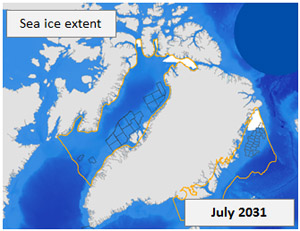 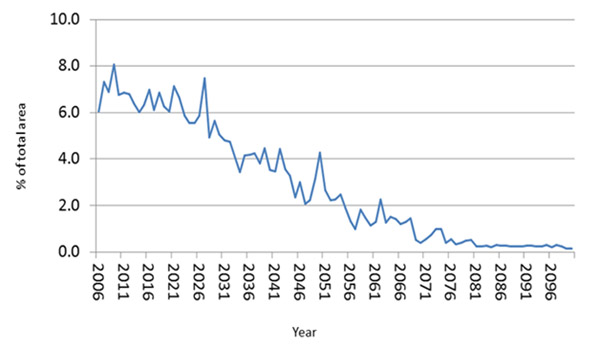 –        Chart shows projected trend towards the end of the summer operational window (September).

We used the desktop component of the Esri’s ArcGIS platform to carry out the analysis required for our research project. We made extensive use of out-of-the-box functionality of ArcGIS for Desktop, both for the geoprocessing of large, raw input datasets and to run the analysis on these datasets. ArcGIS Spatial Analyst was a key tool to manage and extract the information we needed from the input data. Among others, we made extensive use of the Map Algebra tool, for its versatility and core capability of combining and deriving added-value data from multiple input raster. Probability and ensemble analysis algorithms were used to process the massive dataset presented by GCM and CFSv2.

To “experiment” with one of the tools that we feel has a great potential within the O&G space, we deployed Esri’s Operations Dashboard for ArcGIS (Dashboard) from the ready-to-use portfolio of apps and configurable templates hosted within ArcGIS Online. We particularly like the ability of the Dashboard to use the same content that was generated within the desktop component of the platform to create and share operational views of the ice mapping and climatic modelling (see screengrab below). The ability to include multi-display, interactive maps and charts in a single window is really appealing within a real operational context, which works well to deliver relevant information (maps or otherwise) in a concise and neat way throughout the organisation. 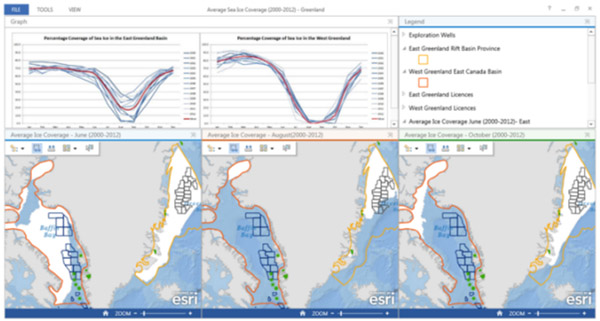 There are limitations to our study which need to be taken into account when considering the results discussed above. The first one is concerned with the ice management strategy that O&G organisations need to put in place in order to safely manage operations in fragile and hostile environments especially. Ice management is a complex discipline with ice charting (extent, thickness) being only one of its components. While the results of our project may feed into that strategy, obviously they are not exhaustive in term of providing the whole picture.

Other limitations are related to the input data we used. As previously indicated we only used data available in the public domain. We don’t know the level of confidence of this data, and errors may affect the datasets which, ultimately, have a reflection on the output of our analysis.

With scientific progress in recent years seasonal forecast modelling and the forecast skill has improved significantly. However, forecast skill varies from region to region. Areas for which more observational data is available tend to have better understanding of the climate mechanisms and, in turn, better forecast skill. Probability and ensemble approaches need to be applied in seasonal climate forecasts in order to obtain robust climate models.

By using recorded and climatic large databases, our research looked at past and projected patterns for the waxing and waning of sea ice in the W and E Greenland basins. This is to support the definition of a sound ice management strategy geared towards the planning of safe O&G operations in the region.

Our research showed that the analysis of historical data only does not provide reliable output to base critical decisions upon. For this reason we used some advanced tools for the simulation of the response of regional systems, and specifically the Arctic, to the increasing concentration of greenhouse gases, and showed the ability of these models to provide geographically stable estimates at the regional scale.

The results of our project clearly indicate that climate change projections need to be taken into account for planning and preparedness purpose. GIS is the key tool that allowed us to integrate a wide range of data from various sources, analyse it, derive and deliver information needed to manage operations within strict regulatory requirements. We used Esri’s ArcGIS platform as an enabler to gain an understanding of how the geography and climatic patterns are shaping up the future outlook, near- and long-term, and to communicate these concepts to the wider audience.

For us this “wider audience” was the people who attended our presentation at the PUG 2014 conference and readers of this blog. In a “real case scenario” it may be folks working in Operations, Environmental, Oil Spill Response, HSE teams within your organisation and beyond.

I’d like to thank Simon Kettle of Exprodat for collecting and processing historical sea ice extend data. Thanks also to Yingeng Li and Peter Urich of CLIMsystems for generating the short- and long-term forecasts. Thanks to Peter Urich for co-presenting at the PUG 2014 conference.