How Big is your Training Gain? Part 2

In part 1 of “How big is your training gain?”, I provided a simple spreadsheet model that readers could have a play with and visualise their potential training gain. Well how did it go? In part 2 I’d like to present and discuss a couple scenarios that I came up with.

Scenario 1 – First training at 6 months: a new geoscientist with no ArcGIS skills, she manages to pick up some knowledge from colleagues during her first 6 months on the job and learns a few things on ArcGIS, along with geological knowledge of the plays the company is looking at. Six months into the job she gets sent on an introductory ArcGIS course and acquires a much greater skill level almost immediately. The ‘training gain’ for this new geologist over where she would have been in three years without training is represented by the area between the two lines (Fig 1), i.e. the ‘training gain’. 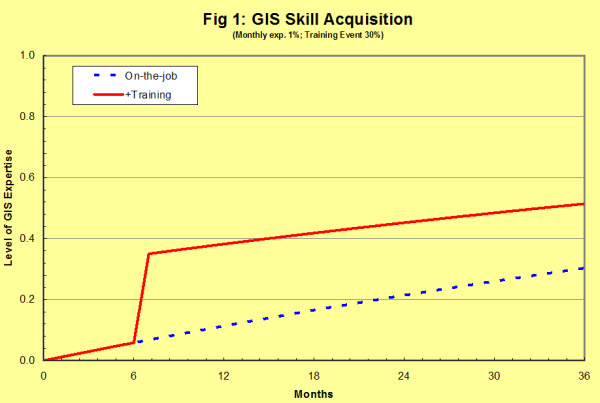 Scenario 2 – First training on day 1: look at the difference in skills acquired by the geoscientist (and by implication her organisation) if she had the same training on day 1 of her employment (Fig 2). The training cost was the same, but the company’s return on investment is bigger. We can argue about how much skill she gained from the training and this will vary from person to person, but she will gain skill and the earlier she is trained the bigger the return on investment. Play with the model to get a better idea of what this looks like. 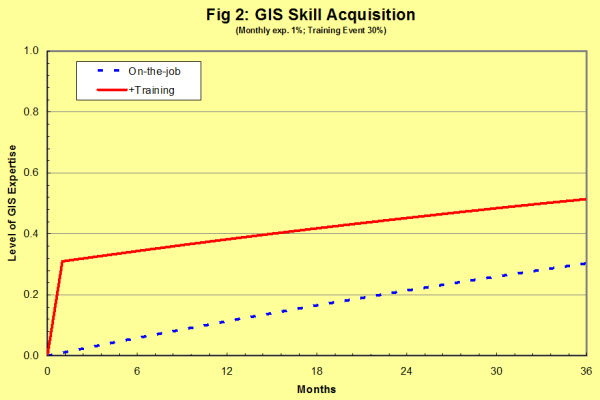 Scenario 3 – Second training at 12 months: the same geoscientist gets a second course at the end of Year 1 so that she can continue to hone her skills (Fig 3). Her skill level is significant, and she begins to assist other users in the company, so her skills begin to positively affect the productivity of others in addition to her own gains. Notice that we have imposed a law of ‘diminishing returns’ on training, in that we’ve allowed the modelled ‘skill gain’ to be in proportion to what is left to know. 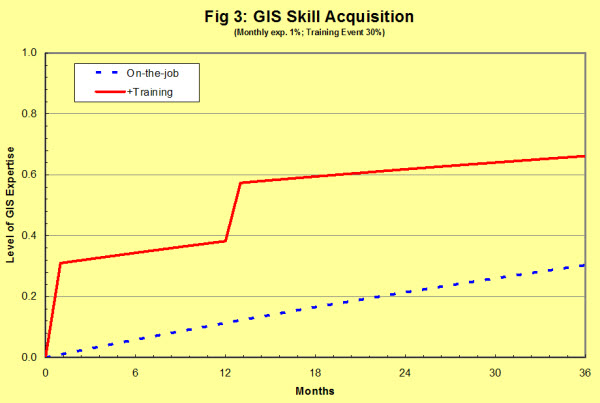 Scenario 4 – Third training at 15 months: the same geoscientist then decides to specialise in supporting play fairway mapping using ArcGIS tools across the groups within her company and asks for a 3rd course 3 months later (Fig 4). She is now, probably, approaching expert user level skills and is actively mentoring and coaching other team members. Additionally, her productivity is significantly higher now and play fairway maps are available to her team more rapidly so that more scenarios can be explored before licence bids need to be tendered. 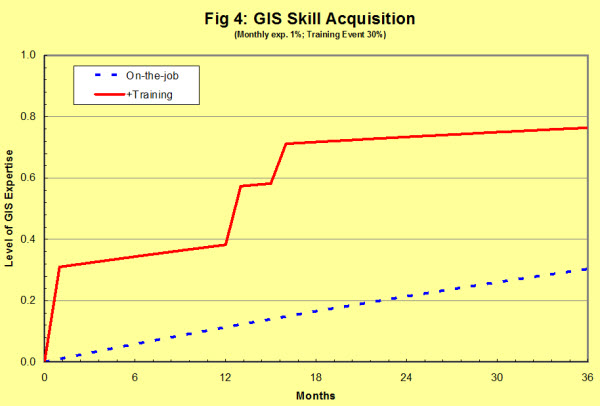 1. It’s only a model – use with caution!
2. We don’t assume that all learning happens in formal training environments – and neither should you, but the question is how much can we realistically expect most busy geoscientists to pick up, while they are getting on with projects?
3. If your organisation wants to maximise it’s effective in-house skills base it needs to train, and training early and training frequently will always have greater impact.
4. If you leave training until ‘later’ you might pay the same or even a little more for the training, and you will certainly have a lower return on investment!

This is a simple model meant to allow those of us interested in professional development to think a little more deeply about the impact of training. We have intentionally kept it simple using only four parameters and readers are encouraged to have a play with it and see what conclusions they draw from modelling their potential ‘training gain’!

Part 3 will explore the assumptions and limitations of this model and what we might do to improve on it. I will also pull together any feedback that comes in!