In 2005, an unnamed oil & gas operator quietly set the world record in drilling furthest from the intended location. Positioning a rig offshore, not far from the equator, someone managed to misread Latitude North as South. As a result, the well spudded 400 kilometres off target.1

This is an extreme example but, in our industry, it doesn’t matter whether you’re off by 100 kilometres or 100 metres – the result might well be the same. Dry wells, ruptured pipelines and blown budgets do not win prizes for how close you got to the right place.

Things have to be in the right place. That’s what geodetic integrity is for. 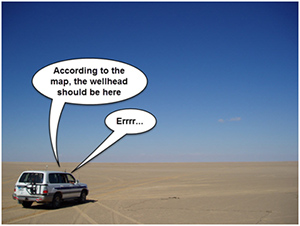 A GPS alone is not enough to ensure geodetic integrity.

What is geodetic integrity?

Throughout the E&P lifecycle all datasets need to line up, like layers in a sandwich, pinned to the right location. The toothpick2 that keeps this sandwich aligned is called geodetic integrity (after geodesy, the science of measuring the Earth).

This is not just a matter of sticking a GPS on everything that moves, or relying on your GIS folks to select the ‘correct’ map projection. Within an organisation there are whole chains of datasets, decisions and events that lead to success – or avoidable failure.

Geodetic integrity is therefore not something that can be entirely delegated to the experts; it forms part of an organisation’s collective understanding and responsibility. Hence it is important that everyone is up to speed with some basic fundamentals.

Debunking some common myths about maps and coordinates

Even though the issues have been known and documented for decades, we’ve come across a widespread lack of awareness and understanding of geodetic risks within many E&P organisations we’ve audited or reviewed around the world.

These days anybody can make a map with Google, GIS, geoscience or engineering software. But most people take it entirely for granted that things appear in the right place, or they assume it somehow happens automatically.

Such assumptions can have serious consequences:

When you say “north”…

…do you mean true north, magnetic north, or grid north? A contractor once drilled 12 dry wells in succession because of confusion over such matters.3

When you say “latitude and longitude”…

…do you mean lat/long as defined by GPS, or could it be one of hundreds of other datums4 in use across the industry, each describing a different point on Earth within a radius of 500 metres? This explains why tourists at the Prime Meridian in Greenwich are permanently perplexed: their GPS devices don’t display zero degrees longitude5. It also explains why you could accidentally find yourself on the wrong side of a geological fault or licence boundary – it does happen.3

…do you mean as measured on a spheroid describing the Earth’s curvature, or on a flattened map projection? And which projection? The difference may be worth millions of dollars. According to legend, engineers once overestimated the cost of an arctic pipeline by 30% because they had measured its length on a Mercator projection (which famously exaggerates areas towards the poles). Whether or not this particular example is true, our industry is littered with such examples big and small, including wrongly defined licence block boundaries.6 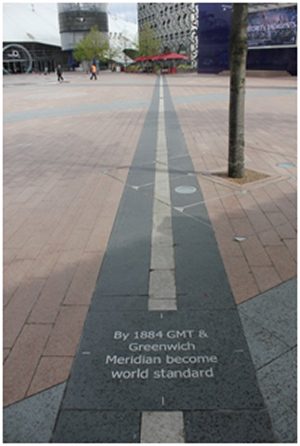 The Prime Meridian marked on the ground in Greenwich, London. Standing on this line a GPS will not display zero degrees longitude. The same is true for many other coordinate reference systems used across the E&P industry.

There are many types of geodetic failures that can lead to avoidable fiascos. In our industry it is critical to know where things are – accurately. This is not just to prevent financial losses such as dry wells, but also to save lives. For example, knowing the exact location of buried pipelines or shallow gas pockets can make the difference between life and death.7

But not every geodetic failure will manifest itself as a spectacular disaster. E&P operators may be understandably reluctant to publicise any mishaps – which is why real-world examples are not easy to come by – in some cases they may not even be aware that such failures are actually taking place. Drilling in the wrong place may still produce oil; just not where it was intended. And smaller errors may still cost money; just not enough to set off alarm bells. Hand on heart, would you know if someone had miscalculated the length of a pipeline, or the land area of a compensation claim, by 3 or 4%?

Your daily dose of geodetic vitamins

Geodetic integrity plays a small but vital part in the success of every E&P venture. It’s basically like Vitamin C: you don’t need much of it, but you can’t live without it. A deficiency in geodetic controls will slowly lead to guaranteed damage: “geo-scurvy”.7 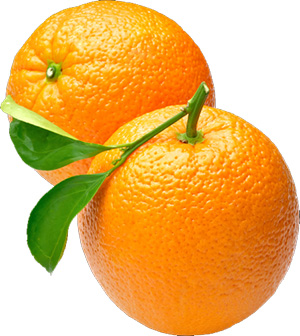 In that sense not everybody needs to be a geodetic expert, but everyone across the E&P lifecycle must have some basic geodetic awareness. This is no different to knowing what to do when the fire alarm goes off, or what number to call in a medical emergency. It doesn’t take much effort to learn, but it’s as vital as a daily dose of vitamins.

Actions you must take to manage geodetic risks

Geodetic issues and best practices are well documented (see References and Further Reading below) but the main rules can be summarised as follows:

Geodetic integrity is like any other HSE, financial or legal risk, and must therefore be managed as such. You wouldn’t try to write your own legal contract, or use a heart defibrillator without training, so why take liberties with map projections and coordinate reference systems?

If you’re wondering whether you need a geodetic health check, just contact us or drop us a line at info@exprodat.com.

4. A datum is a reference system that, not unlike a blanket, envelops the earth in a grid of latitudes and longitudes. For historic and scientific reasons there are over 600 different datums worldwide (as listed in the EPSG registry), each one created for a particular time, region or purpose. This results in the coordinates of the same point on Earth shifting by up to 500 metres depending on the datum used.