“So,” said Santa, his grin widening, “we can get rid of the reindeer?”.

He pushed back from his desk and turned to gaze through the glass wall that separated his office from the staff canteen. The reindeer sat together at one of the long tables that were arranged in rows in the canteen. They weren’t happy. The R&D department had finished whatever it was that they’d been up to for all these months and were going to demonstrate it to Santa, today. For some weeks now, rumours had been circulating about what they were up to, rumours involving Elven jokes about what they would be doing with the stable block and the reindeer themselves.

Santa chuckled and turned back to the presentation. The chief Elf, a cheerful soul at the best of times and now sporting a smile so wide that it was a wonder that the top of his head didn’t just tear off, advanced to the next slide, which showed a bar chart with two bars, one big and one small.

“Yes, we can. The new system has 500% of the current delivery capacity and can be expanded as necessary, by bringing additional units online”. He used a toy snooker cue to point at the higher of the two bars and added “It’s future proof.”.

He gathered up his papers and then said, “Ok, let’s go and see the test system.” 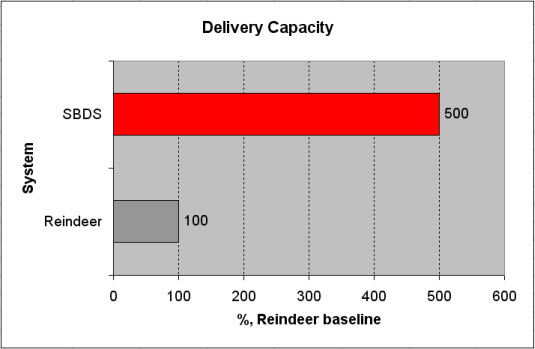 “Curtains for us then. I wonder what it’ll be – reindeer roast or burgers?”. Donner said, chewing one of his hooves.

“You guys need to do some exercise, you’re getting fat. No need to let yourselves go, just yet…” said Santa to Donner as he walked past with the Chief Elf. 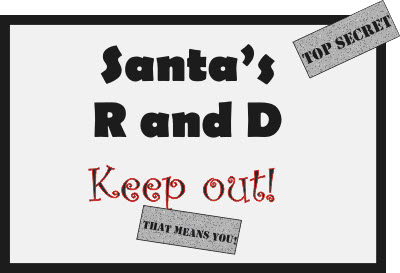 Santa’s Little Helper, who for the benefit of narrative confusion was a 6ft 5inch human being called Bob with a ponytail and predilection for Prog Rock, swivelled his chair round and began to speak. “So, what we here have is a state-of-the-art delivery system, based on ballistic missile technology that we picked up for a song. Pin-point targeting, laser-guided whatnots and some great whojiwhatsits. Any questions?”. Santa rolled his eyes and shook his head, giving him the idea for a great new toy.

“We load the presents into our delivery pods, one or more per city, town or village, and then fire them off. The firing sequence is configurable for a full 24 hour midnight-following delivery schedule. You press the button and then sit back and watch the show. “ filled in the Chief Elf.

“Sounds fab – can’t remember the last time that I had Christmas off. Sort of gets rid of my raison d’être, though, don’t you think?”

A momentary silence followed, which was broken when Bob burped quietly.  “Show him the simulation” suggested the Chief Elf to Bob. “Ah yes. We’ve obviously got a test system outside – the thing firing presents into the sky, you may have noticed it?”

“Yes, bit difficult not to, it’s rather noisy. I like the wrapping paper on the pods, though.”

“Well, in order to give you a full understanding of what’s going on, we’ve created some simulations using a couple of cool free tools. The first one’s by ESRI, a leading producer of GIS software – ”

“A great company, who we’re partnering with on a number of projects”, piped up the Chief Elf.

“and the second one’s by Exprodat, a leading implementor of GIS solutions to the Oil & Gas E&P business. They gave us an early Beta, works a treat though.”.

“Really, I didn’t realise we were using something from them. They’re great too, we use their Exploration Analyst tool to define areas where children are being really naughty, enabling us to scale our delivery solutions accordingly. Saves us a pile of cash.”

Santa was looking a little bored. He’d taken his hat off and was playing with it. He sensed that the others were looking expectantly at him, pulled his hat back on and spoke. “Enough with the shameless product placement – you can put some links at the end of the presentation. On with the demo.” 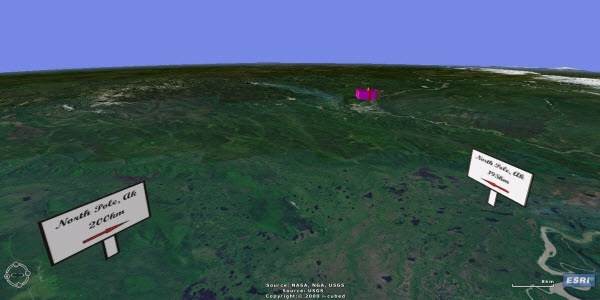 “So we can fire the presents from here? No need to fly? Nice”, said Santa. “Looks great – not enough presents though!”.

“Yep, we’re limited by the RAM on this machine, could do with an upgrade. We’d be able to simulate more present trajectories. But, as we’ve said, the production system will be able to handle a full 24 hour delivery cycle to all the children on the planet.”.

Santa pondered for a moment.

“A thought occurs – what happens when the presents land? Surely they’ll be smashed to pieces?”

“No, we’ve thought of that”, said Bob with a self-satisfied grin. “A miniature parachute deploys just before impact, and the present floats gently down the target chimney. It took a while to adjust the guidance systems to cope with it. We’re thinking of licensing the technology back to the military.”

“But what if the fire’s lit, or if they don’t have a chimney?”

“Err. That’s a good point. Didn’t think about that. One for version 2?”

“Well…” started Santa, but was interrupted by the Chief Elf. “It’s got something you don’t have now, though – you can punish the naughty children.”

“Punish? I thought not getting presents was good enough? What sort of punishment?”

The Chief Elf came to the sudden realisation that this had been a very bad idea. Bob, however, had not yet done so. “We’ve trialled it – we can drop a bomb straight down the chimney, taking out the naughty child entirely. Obviously ordnance has a cost, but over a ten year period the savings on database administration more than make up for it.”

“You’re both on present-wrapping duty for the next Millennium.”  Santa wandered back to the canteen. The Elves were already dismantling the new delivery system and packing it back into the crates that it had come in. News had reached the reindeer and they were looking a lot more cheerful. Santa took a deep breath and walked over to them. 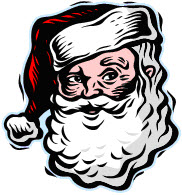 “Hey guys, how’s my A-Team? Got everything you need? New stable, perhaps? Extra green grass? Whatever you want, ask the new Chief Elf, you’ll get it.” Santa closed his office door, walked over to his desk and sat down heavily in his chair. Sometimes it was tough being Santa. He needed a holiday. He picked up a piece of paper and fiddled with it. Then he picked up a pen, wrote Merry Christmas on the piece of paper and smiled to himself.