Stereo viewing, or Stereoscopy, has long been used by geoscientists to create the illusion of depth. Traditionally, overlapping air photographs (“stereopairs”) have been viewed with a stereoscope, where the stereo effect is created from a slight offset in the viewpoint of each of the stereopair photographs.

Investigating an area in “3D” affords a greater understanding of the processes involved that have shaped the area’s topography. This in turn can help geoscientists understand the nature of the underlying geology. Recent developments in technology, such as the “Visualization Walls” used by major Oil and Gas companies’ E&P departments, allow geoscientists to be immersed in their data. The use of special glasses permits them views of their data from the surface, or subsurface, in 3D, and they can investigate the data by roaming around inside it.

Can we make a visualization wall with ArcGIS?

Not quite, but we can create worthwhile “2.5D” perspective views, and also generate pseudo-stereo “anaglyph” images. For stereo anaglyphs, ArcGIS has good 3D capability using the ArcScene software, which is part of the 3D Analyst extension. It tends to be underused in E&P since many geoscientists use other software for the generation of 3D surfaces. In order to create and view stereo images with ArcGIS, we need a grid of elevation or depth values, and standard stereo red and blue glasses.

In the following example, you can see how we can use freely-downloadable DEM and satellite imagery to create a 3D visualisation of an area. The greyscale image is from an ASTER DEM; the colour image is an enhanced satellite image from Landsat 8. These data are from the Zagros fold belt in Iran, an area rich in oil fields.

To view a stereo image in ArcScene:

1) Load the grid, in this case a TIF file, containing the elevation (DEM) values.

2) Now select Floating on a custom surface and use the DEM as the source for the elevation data. 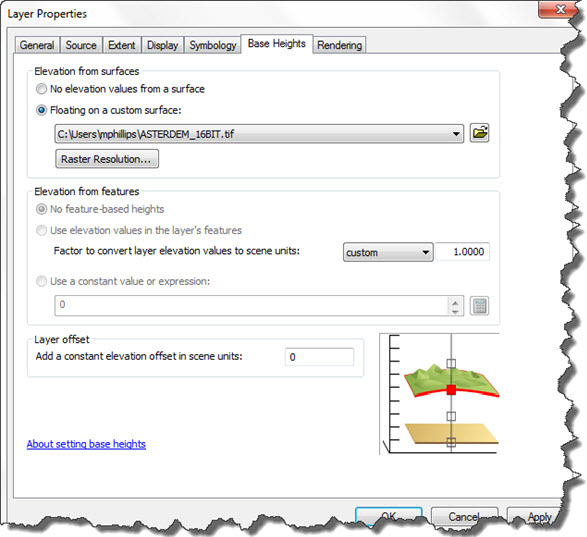 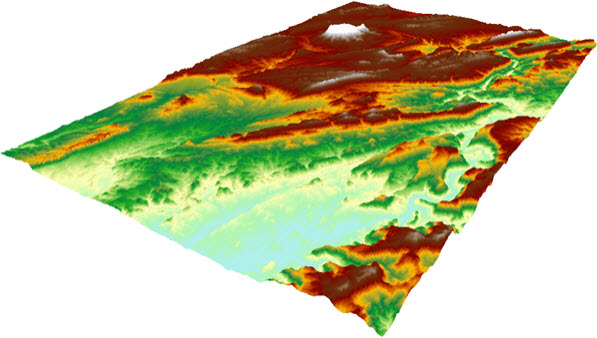 Though the perspective now looks correct, it is still diplayed on a flat screen in 2.5D, which means it gives the impression of 3D, without the depth effect created when using stereopairs in a stereoscope.

4) Load the satellite image. To drape it over the DEM, use the DEM as the source for the height data by setting the Floating on a custom surface value to the DEM again. This gives the scene a more realistic view. You will need to uncheck the DEM so that only the Landsat image is displayed.

An image like this example shows a wealth of detail for a geoscientist wanting to study the geology and geomorphology of an area. 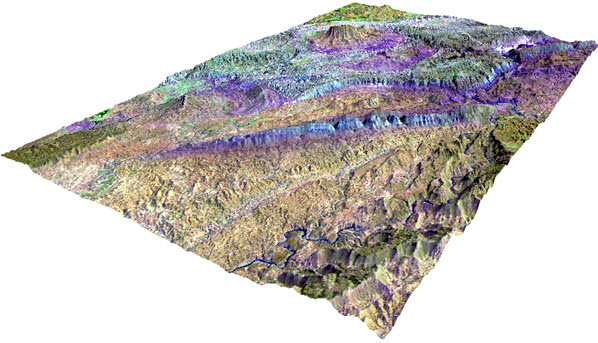 To go a step further and produce the impression of depth similar to a 3D TV or a 3D cinema effect, you need to convert the scene into anaglyphs. 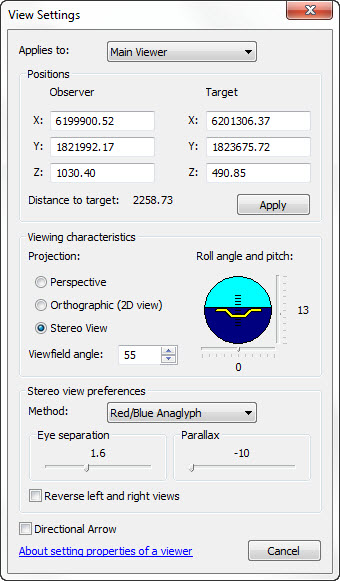 2) Now use the dropdown option in Stereo view preferences > Method and select Red/Blue Anaglyphs which, as the name suggests, creates a red image and a blue image, displayed with a slight offset.

By default, ArcScene places the blue anaglyph to the left and the red anaglyph to the right. If your stereo glasses are not in the same orientation, switch the order of display of the anaglyphs. When you have it correctly set it should produce an enhanced 3D depth effect, with the image appearing to stand out from the screen. 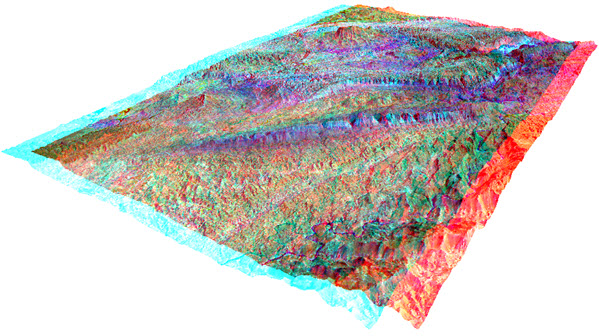 Can we improve the stereo effect?

To get the best from this you may need to adjust the Eye separation which is just below Stereo view preferences. I found that with this set to 1.6 and the ArcScene window maximised, the effect really worked with the image appearing to float in front of the screen, in 3D.

Another way to ‘fine tune’ is to move the Parallax slider to the right to increase the movements of scene objects relative to the observer, or to the left to decrease them. Eventually you will find the perfect set up for your own eyes.

Whilst this is not an immersion viewing system, for a quick and easy to create 3D effect on a desktop, with only ArcScene, stereo glasses and a minimum of set-up, it is a useful function for virtual field mapping – and it’s fun to use!