Topology is the study of geometrical properties and spatial relations that are unaffected by continuous changes in the shape and size of a figure. A topologist doesn’t see any difference between a donut and a coffee cup.

In ArcGIS, topology in a geodatabase is the arrangement that defines how point, line and polygon features share coincident geometry. Topological data structures are useful because they provide an automated way to repair digitising and editing errors; they reduce data storage for polygons as adjacent boundaries are only stored once and they support advanced spatial analyses such as adjacency, connectivity, and containment.

Two types of topology are offered in ArcGIS for Desktop. Map topology is created during an edit session in a map document and works with a Basic license. Geodatabase topology is used to create topological rules for feature classes in a geodatabase and requires a Standard or Advanced license.

There are many different topological rules that can be implemented in a geodatabase, but map topology is easiest to discuss as it is available in all license levels of ArcGIS for Desktop. Have a look here for more information on geodatabase topology.

Very often we receive shapefiles or feature classes which look like this: 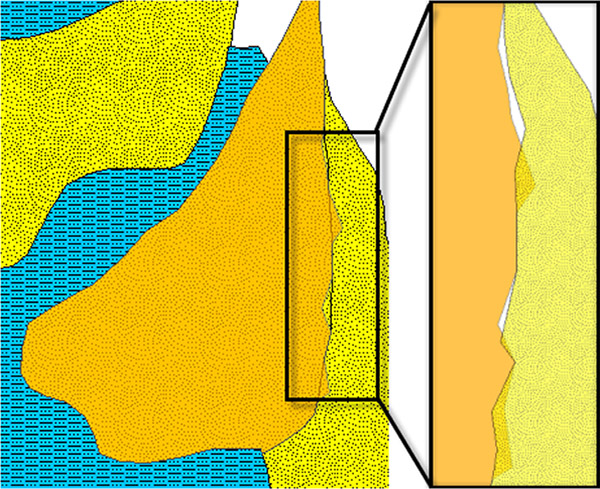 To fix the problem I need to move the boundaries of the polygons so that they perfectly overlap (or are co-incident). I could try to do this manually, by setting a very high snapping tolerance, but this can result in very tiny gaps and overlaps which may go unmissed until I start merging feature classes (with the Union or Intersect tool).

The best tool to use to remove these digitising artefacts is Topology.

Map topology is created during an editing session, so I will need to have ArcMap open, an active editing session and the Topology toolbar visible (Customise > Toolbars > Topology). Here’s the workflow:

If I don’t use topology tools to do this, I will have to move each polygon edge and ensure that the edges match and that I am not shifting the polygons as I move the boundary.

The original polygons are shown in image A. I want to move the boundary between the polygons so that the 2 stick plots that contain yellow turbidite sands are in the deep marine sandstone basin polygon.

Image B shows what would happen if I only move the polygon boundary for the deep marine sandstone basin using standard editing tools. Note that large gaps would be created (whitespace). 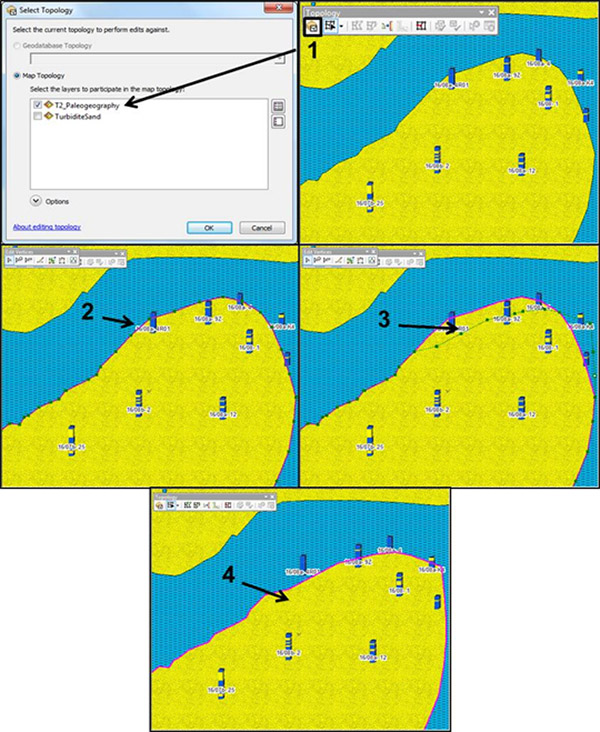 I have now successfully edited adjacent polygon boundaries using topology tools, improving the geometric quality of my data, which in turn reduces the scope for error in further processing and analysis.