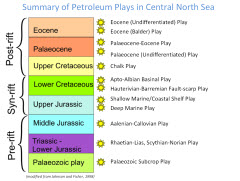 With the UK’s 26th Licensing Round expected to be announced in January 2010 its likely that the thoughts of the petroleum companies operating in the North Sea will soon turn to figuring out what the best acreage likely to be on offer is.

Coincidentally, Nursultan Yakhiyayev, one of our 2009 summer students from the Imperial College Petroleum Geoscience MSc has recently spent a couple of months doing just that – for the UKCS Central North area, using a combination of desktop GIS tools. The project aims were to perform a regional-scale block ranking of the UKCS CNS based on an analysis of the key play risks, and in turn to analyse the acreage positions of the companies active within the area. 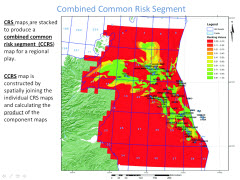 For the purposes of the project Central North Sea Palaeozoic to Late Eocene plays were subdivided into three major play groups according to three main rift related phases. Twelve main plays were described, and exploration risk maps developed for each play reflect the presence of prospective play fairways in the study area and future exploration opportunities.

This was achieved by constructing a set of common risk segment maps (using Exploration Analyst) for the twelve petroleum plays identified across the area. For each play, risk maps were developed for each petroleum system element (i.e. reservoir presence, seal presence and hydrocarbon charge) using paleogeographic/depositional environment datasets as ‘proxies’ (specifically Exploration Geoscience‘s What Map and the Millennium Atlas GIS Edition datasets). 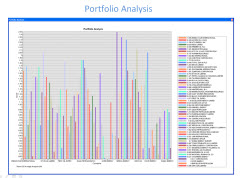 Stacking the 12 plays and summarising the data by block then allowed the licensed acreage to be ranked according to user defined scoring and weighting criteria . Then, by integrating company equity data for the blocks, companies active within the area were able to be analyzed, compared and ranked, with the results showing which companies have the best acreage.