Web GIS Is Not Optional (Unlike Your IT Department)

I came away from this year’s excellent Esri Business Partner Conference with one clear message: ArcGIS is a Web GIS system (or rather, ‘an integrated Web GIS Platform’ in Esri speak). Now Esri have talked about the importance of Web GIS for several years, but this year the message was unambiguous. If you want to deploy a GIS system, you need to put Web GIS at the core – be it ArcGIS Online hosted by Esri, on-premise Portal, a cloud-based deployment on something like AWS, or a mixture of the above.

A far cry from clunky old ArcIMS (remember the days of Desktop in a browser?) or just web maps, the new ArcGIS platform acts like a central nervous system, delivering web-enabled location data, maps, analytics, identity management and focused applications. It’s an order of magnitude faster to deploy and easier to use than ever before. As my colleague Thierry Gregorius discusses, Web GIS is now mainstream, leveraging trends around distributed data, Web service integration and enterprise systems integration.  Today, working without Web GIS is like trying to live without WiFi – but in our industry some people are yet to discover it.

Your way to realising the benefits of being able to discover, use, make, and share maps from any device, anywhere, at any time, throughout your organisation, is through Web GIS. It really is no longer optional.

Will Web GIS take off in Oil and Gas?

Just before our industry pulled down the shutters in this, the deepest of downturns, it generally very much regarded Web GIS as a ‘nice to have’. You would typically start with Desktop, perhaps in just one department, add in a bit of Server and then if you have some money left over, throw a few Web maps on top to broaden out access a little. There was rarely a clearly defined strategic organisational vision for leveraging location information. Cloud-based GIS was viewed with suspicion, or was simply a non-starter due to IT policies.

The whole ArcGIS Platform model was just about maturing when the oil and gas spending cuts hit. Some organisations, such as Seneca Resources, had already demonstrated the value of the Platform. Now it’s going to be really interesting to see what happens when the industry moves in to the next recovery phase.

I suspect that one of the first changes we’ll see is a total reappraisal of IT strategy. The days of massive onsite IT departments and infrastructure are surely numbered. Cloud computing has come a long way in the last few years in terms of price, performance, capability and most importantly, security. All of us consume cloud services on a daily basis through apps on our smartphones, tablets and other tech, so the suspicion is falling away. And what was clear just before the crash was that in-house IT was no longer an enabler, it was a handbrake. The Oil & Gas business was starting to move faster than traditional IT planning cycles. Esri release new updates to their latest generation Web and desktop applications every 3 months or so. Good luck seeing those any time in the near future in most Oil & Gas companies! And as the diagram below shows, the cloud has the potential to reduce IT cost and complexity, allowing oil & gas companies to focus on their core business; finding and producing hydrocarbons safely and profitably. 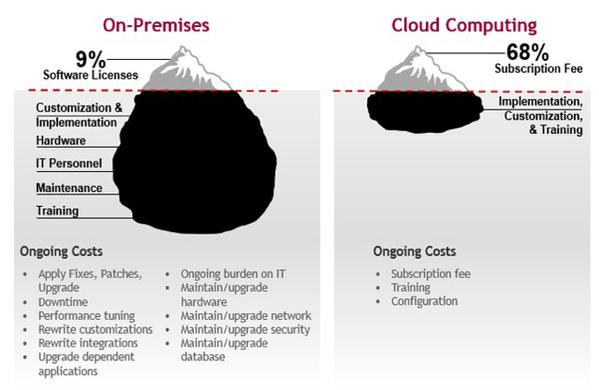 The bottom line is traditional conservative IT approaches caused inertia, frustration and lost opportunity, as well as loading the business with enormous cost. Something needed to change even when oil was $100+ a barrel.

So where does this leave us in the world of GIS? Our mission now is to show our clients that the Web GIS Platform should be at the core of their location strategy, right across their organisation. Those companies that get this will undoubtedly be the ones that derive early business value. It’s time to move on from thinking about GIS in terms of desktop/server, embrace the world of the cloud and Web services, and remove the IT handbrake that has been holding us back.

The ArcGIS Platform is ready to meet the challenges of a new Oil & Gas industry. The question is, who is bold enough to embrace it and reap the rewards?