Zen and the Art of Web Mapping

When I first started working with web-based GIS, oooh, back in 2001 or so, it seemed that ESRI was attempting to deliver “desktop-GIS-in-a-browser”, and as we know now, generally coming up short. Since the birth of ArcIMS, ESRI invested heavily in ArcObjects and ArcGIS Server, presumably to deliver on the aims of its original internet mapping vision.

Whilst Brown’s statement that “There is a new kind of map – a ‘Web Map'” might annoy those of us who have spent hours, days, or weeks of our lives hacking away at an ArcIMS AXL file (like, duh, what we doing before [dribble dribble]?), its at least a hook on which to hang a reframed picture. Brown goes on to explain the new ‘Elements of a Web Map’ as being limited to: 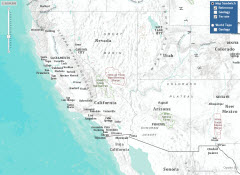 ‘One or more maps that provide a framework or context for displaying the operational layers’: In a nutshell, the base map, but sourced from a combination (mash-up?) of map services from multiple sources (e.g. ArcGIS Online etc.) and configured with settings such as scale dependency, symbology and labelling optimised for use at mutliple scales, designed specifically for what the ‘web map’ will ultimately be used for. End users won’t have to worry about controlling the base map layers, they’ll just behave exactly as the users expect. In fact, I’d say that the intention should be that the base map layers do their job so well as to go almost unnoticed by the user.  Here’s an ESRI Geology map example – the base map layers are the Reference and Terrain layers. 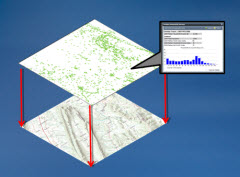 ‘Information Popups and Reports for Operational Layers’: The functionality around which the map is built, or, to put it another way, the map’s ‘raison d’etre’. Out are the days when web maps are there just to let you see your data. In come highly functional maps that non-GIS savvy users can drive, harnessing all the power of ArcObjects and geoprocessing in order to interogate, analyse and run reports on the operational layer, with all the compexities hidden from the user. So, no table of contents, no ‘active layer’, no printing widget, no complicated menus or toolbars. Unless of course the operational layers require it.  In short, maps that a dummy, an idiot, could use – someone who has never even heard of ArcGIS Desktop, let alone waited for the ‘Add Data’ dialog to appear.   In our Geology map example there is one operational tool – the opacity slider in the lower right corner that changes the transparency of the Geology.

Whether we’ll ever replace the geoscientists ‘data index map’ that have become common in the E&P industry with new-style ‘Web Maps’ (called “Rich Internet Applications“) remains to be seen, but its an interesting vision, and certainly one I can see applications for in the E&P sector, e.g. with management dashboards or interpretation summary and reporting tools.

But I think its somewhat ironic that with ArcGIS Server (from 9.3 onwards) finally technically able to deliver on the promise of “desktop-GIS-in-a-browser” its unlikely that we’ll be seeing ‘all singing all dancing’ web-based map tools widely delivered as desktop GIS replacements anytime soon.