Houston, we have a platform

Exprodat has a long tradition of attending the annual Esri Petroleum GIS Conference in Houston. Historically known as the ‘PUG’, it is co-hosted with the Petroleum User Group, the well-respected GIS industry body which has been the driving force behind the event for over 20 years.

This year’s event was one of the best in a long time, attended by over 1600 delegates. Whilst there were far too many presentations, workshops and exhibits to report on here, I thought it may be helpful to share a summary of the main highlights, particularly those relating to the main plenary session on Day 1, as well as my own interpretation on what it all means for our industry.

The keyword being – you guessed it – “the platform.”

The plenary presentations kicked off with the meaning of life… “inspiration.” 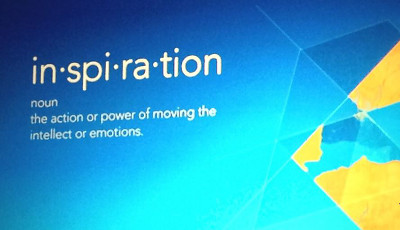 Inspiration, the theme of Esri’s message.

Inspiration was chosen as a keyword to encourage people to think about GIS afresh: let go of pre-conceived ideas.

Esri talked about “muscle memory”: once you’ve learned to do something in a certain way it becomes automatic, like riding a bike. Whilst this is a very efficient way for the human body to operate, it makes it harder to respond to new challenges.

Esri director of sales Chris Cappelli illustrated this with his chosen sport, triathlon. When you’ve been riding the bike for a long time, it feels really weird – wrong, even – to get off and start running. It is the same with switching from old to new GIS workflows.

It was a clever message, and well delivered. Many of us in the oil and gas industry will recognise the feeling of muscle memory. I can think of quite a few practices that would fit that description. However, change will have to happen – and is happening – as digital natives are beginning to enter the workforce.

Chris Cappelli again illustrated this well with a personal anecdote. His teenage daughter had recently used Evernote to collaborate with classmates on a school project, but was told by the “outdated” teacher to submit their work as a flat Word file – which lost much of the group effort and creativity that the students had put in.

Similarly, Esri expects that corporate users will want their GIS and business systems served up with the ease and flexibility that people have become accustomed to in their mobile apps: few clicks, a uniform and intuitive user experience, all within a simple system that is as easy to use as an iPhone. 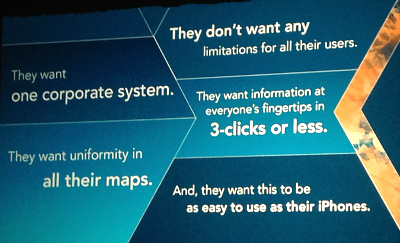 And thus, Esri challenged the audience the rethink their geospatial strategies. GIS should “light up” everyone in the organisation, across all functions and assets. The vision is that making and sharing maps should be easy, universal, and seamless. Organisations need a system that provides the right maps and data to the right people wherever, whenever, on any device.

That system, of course, is the “platform.” 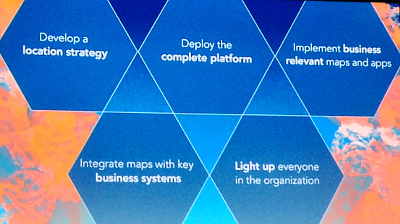 The platform location strategy: “Light up everyone in the organisation.”

So what’s the verdict on all this?

Last year, when Esri first unveiled its platform vision to the E&P industry, many people in the audience squirmed uncomfortably in their seats. Then, a lot of folks I spoke to found it difficult to imagine how such a platform would help solve their issues. Was this yet another system, merely adding to existing complexity and legacy? The muscle memory, formed by past experience with monolithical IT systems, had some problems getting used to this new idea.

Not so this year. Esri put together a clear and coherent storyline, backed up with demos showcasing specific use cases spanning the entire oil and gas lifecycle.

These presentations effectively demonstrated an ‘Evernote’ way of working, where maps were being created, shared and annotated on-the-fly by geoscientists, HSE managers, pipeline engineers and the like. Data was effortlessly hopping from one device to another, seamlessly kept in sync via the platform. It was an impressive show.

Of course, anything is possible with clean demo data. But I think the audience really got it this time. There was a good vibe in the room, and it felt like things clicked into place. People could see beyond the old web-GIS paradigm that merely renders pre-cooked map tiles in a browser. It’s not ArcIMS anymore. It’s time to retrain the muscle memory.

Oh no, now anyone can make a map!

But wait. If anyone can make a map, what will happen to our data? What about controls? What about geodetic integrity? What about data integration? And where does this leave us, the “professionals”? These questions popped up later in hallway conversations and workshops. The muscle memory wasn’t going to be defeated that easily. 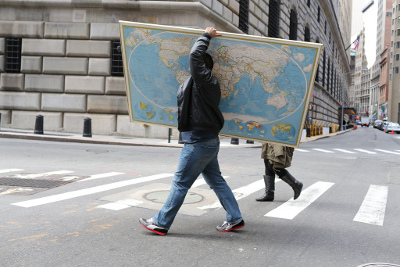 Sure, some things still need ironing out. But it felt like people were genuinely beginning to picture what the platform might look like in the real world of oil and gas operations.

For example, compared to last year, I picked up noticeably fewer concerns about security. The concept of ‘identity’ (automatic user authentication) probably helped, and ArcGIS Portal is enabling platform-type features behind the firewall. Some companies have already begun implementing this, as Nexen’s well-attended talk demonstrated.

And GIS professionals need not fear for their livelihoods. As geospatial functions become available to a wider audience (something we’ve all been wanting for a long time!), the expertise and oversight to underpin it all are as important as ever. That is also why the GIS desktop is here to stay alongside web-based and mobile incarnations. The platform doesn’t really replace anything, it just joins things up.

Esri repeatedly talked about organisations needing to “develop a plan” for the platform: a “location strategy.” And indeed, many E&P companies I spoke are actively reconsidering their geospatial strategies, driven either by organisational change, or by the need of a technology refresh. So now is a good time to be looking at how the Esri platform could ease and accelerate that transition.

This is also evident in increasing numbers of conversations focusing again on wider information management. Whilst the platform makes it easier to create and share GIS-based data, integration with geoscience or business applications remains a complex undertaking. In our industry not every dataset originates within GIS, and so the new user expectations will demand seamless interoperability across the organisation and IT landscape.

The need for careful thought and foresight in architecting these fundamental workflows will remain. This was nicely illustrated by one BP NAG presentation, which talked about making a clear distinction between mastered, derived and spatialised data.

There are still some challenges ahead, but I believe the GIS platform will ultimately inspire a new way of working that is less rigid and more open and productive.

For many organisations in our industry, built on a long history of legacy data and systems, this represents a cultural shift that may require a redefinition of roles and responsibilities. For end users to become more empowered, geospatial professionals may have to learn to let go a little, taking a more supportive rather than controlling role.

This may seem a bit scary at first, but once released from the futile task of trying to control and structure all things geospatial, the benefits should eventually outweigh the risks. In the petroleum industry there will always be a need for security, confidentiality, and integrity, but there is also a need for people to get on with their jobs.

What is required is balance, common sense, and perhaps new muscle memory. As I indicated in my own talk, we may need to take inspiration from other disciplines to get over our legacy and integration issues – including data science, machine learning, art and design. Last time I checked, Google did not require the internet to clean up its pages so it could search them and provide useful results in a simple interface.

There was clearly a sense of a fresh start at the 2014 PUG, not just from Esri but also from some of the oil and gas companies in attendance. The platform is no silver bullet and it will not solve every issue. But it should bring us one step closer to people being empowered to work more like people, able to do things themselves in their own way – more intuitive, collaborative, creative, and real-time.

This may be a scary thought for data managers but, as the platform increasingly automates the synchronisation of datasets, things could also become easier here (at least with native GIS data). And when people have instant access to the data they need, they may finally find the time to do more with it. Spatial analytics, anyone?