How Tectonic Motion is affecting your Map Accuracy

On our dynamic Earth, continents don’t sit still. They slowly move around the planet, stretching oceans and lifting mountain ranges. Sure, it’s not like you risk being overtaken by Africa on your commute. Tectonic movements average a couple of centimetres per year – about the same speed as the growth of your fingernails.

But over time, things add up. And it’s beginning to impact the accuracy of geospatial data.

Why your maps are probably out of place

Every map is based on a Coordinate Reference System (CRS). Virtually every CRS assumes that land masses don’t move. And that’s becoming a problem.

Australia, for example, is one of the speediest continents on the planet. It is moving northeast at a rate of 7cm per year. As a result, it has now moved nearly 2 metres since its national datum, GDA94, was defined in 1994. That is enough for the GPS on your phone to put you on the wrong side of the road.

Australia has therefore launched a new and updated CRS, GDA2020. This realigns the reference frame with the actual location of the continent. The USA have announced similar plans for 2022, migrating from NAD83 to NATRF2022. As more years pass by, other countries will no doubt update their national CRS as well.

Problems arise when you overlay present-day navigation data – say, GPS traces from a vehicle or drone – on a map defined in a CRS that no longer reflects the position of the continental plate it is tied to.

This is because the position of GPS satellites and receivers is determined not in relation to land masses, but to the centre of the Earth – using a Cartesian XYZ reference frame fixed to the equator and prime meridian, which don’t move with tectonics.

From the point of view of a GPS satellite, even something as stable as a trig pillar looks like a slow-moving ship, drifting across the Earth at a few centimetres per year. 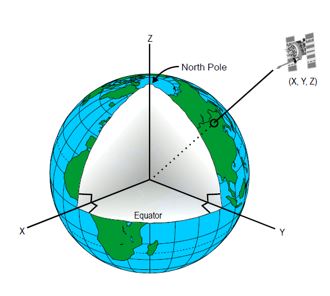 A bridge too far

In the oil and gas industry, this problem was highlighted by an incident dubbed “A bridge too far”.

In a 2017 presentation, a representative of the IOGP Geomatics Committee recounted the recent example of a 60-metre long bridge designed to connect two offshore platforms. The position of both platforms had been measured with high-precision GPS equipment using a realisation of the global WGS84 datum.

But – and this is the crux – not at the same time.

Apparently, the engineers had used positioning data for one platform predating the other by more than 18 years. During that time, moving at a rate of nearly 3cm per year, the continental plate – including both platforms – had moved out of place by a whopping 49 centimetres. So when they came to install the bridge, which was prefabricated based on the GPS measurements taken 18 years apart, it didn’t fit. Ouch! 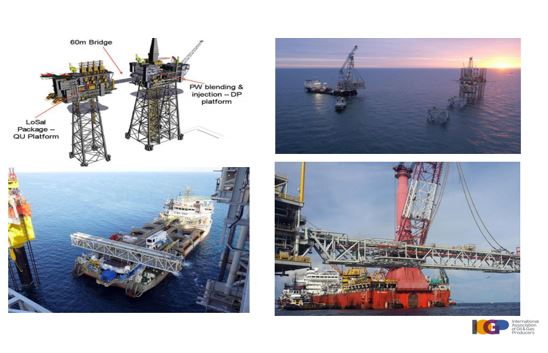 How could this happen? The relative distance between the platforms had not changed, of course. They were firmly pinned to the seafloor. But to an observer sat on a GPS satellite, both platforms would have looked out of place compared to 18 years earlier. And so their positions, surveyed decades apart and unadjusted for the tectonic movement, were completely out of sync.

It’s like measuring the distance between two cars moving at the same speed – but taking a GPS fix for one car at a different time to the other. The difference in GPS position would not correspond to the true distance between the cars. It was the same with the platforms, albeit at much slower speed.

What you need to do now

Geospatial professionals need to be aware of the growing gap in accuracy between relative and absolute positioning on the Earth, especially in countries where this has not (yet) been rectified with a new CRS.

As a rule of thumb, the national CRS should always be used in preference to WGS84 or other global system unless there’s a specific reason not to. Also, take special care when:

Official bodies like IOGP are now advocating dynamic CRS systems, in which every dataset is given a timestamp and plate velocity. This would eliminate the issue and remove any confusion over true locations. But implementation will be complex and largely dependent on software vendors. It will also require diligent management of metadata, particularly for timestamping data.

Meanwhile, keep your eyes peeled for new CRS systems appearing in different countries or regions to help realign things. This in turn will increase the need for CRS transformations between old and new systems. It will also require extra vigilance to prevent confusion between the growing list of CRS systems.

As time goes on, things are likely to get more complex. If in doubt, the key advice is to always consult a geodetic expert. In the meantime, if you need a refresher on CRS systems in ArcGIS, check out our 1-day course ArcGIS Coordinate Reference Systems for Petroleum.