The International Association of Oil and Gas Producers (OGP) recently released EPSG Area Polygons as a freely available spatial dataset that accurately defines the applicable extent of the CRSs and transformations in the EPSG Geodetic Parameter Dataset (EPSG Dataset). 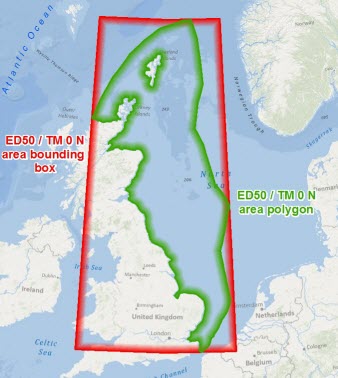 However, use of the Area Polygons dataset is not as straightforward as it could be, as you need to note the area code of interest in the polygon attributes, then search through the EPSG Dataset for corresponding area codes in the Coordinate Reference System or Coordinate Operation tables.

I figured it might be easier to identify valid coordinate reference systems and coordinate transformations for a location directly from the polygons themselves in GIS, so did some simple data processing to achieve this (go straight to the download of my results).

I merged the area polygons with the EPSG Dataset Coordinate Reference System table to create a feature class whereby each coordinate reference system is represented as a single valid area map feature.  This was achieved using the Make Query Table system tool.  The EPSG Area Polygon shapefile and the Coordinate Reference System table were listed in the Input Tables, making sure the shapefile was listed first (otherwise the tool creates a table rather than a feature class). 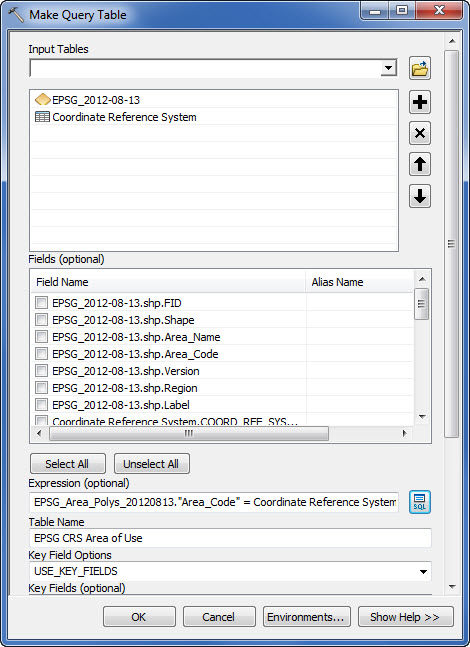 It is worth noting this expression failed verification in ArcMap but was still successful. 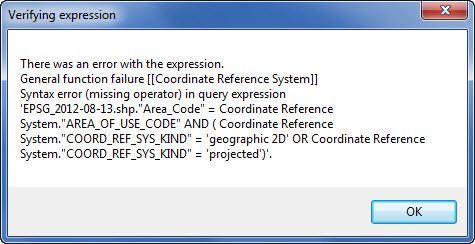 The resulting layer was exported to a new feature class.

Finally, layers were classified by region as displayed on the OGP website, and shared as a layer package on ArcGIS Online for others to use.

To use the Area Polygons data first download the data from ArcGIS Online.

Once you have the data in an ArcMap session use the Identify tool to click on a location of interest or draw a rectangle delineating an area of interest on the map.

The Identify dialog displays which coordinate reference systems or transformations are valid for a location. 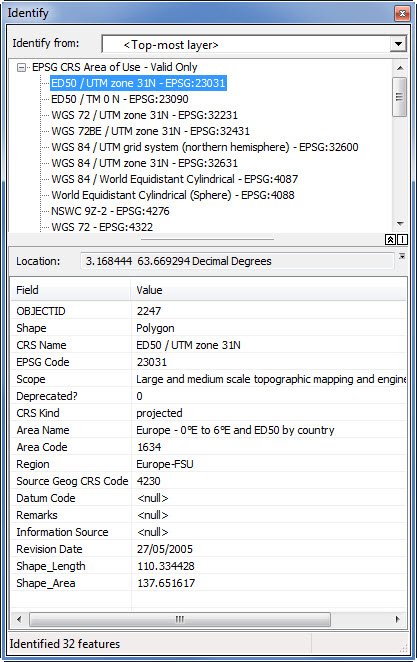 One great application of the new layers is to take a blocks or license layer and, in ArcMap, do a ‘Select by Location’ against the EPSG Area Polygons layers to find out which CRSs or coordinate transformations are applicable for the area of interest. You can also do a simple search on the data by attribute values – for coordinate reference system name, transformation name, EPSG code or area of use name.

There are several options for those who wish to improve the layers.  For example, new layer files could be created to split geographic and project coordinate references, to filter out coordinate reference systems or transformations with global or hemispheric coverage, or for projection systems such as UTM or Gauss-Kruger.

The Area Polygons are a great addition to the EPSG Dataset as previously valid areas for coordinate reference systems and transformations were noted using bounding box coordinates only, which by definition also contained locations where they are invalid.    As the OGP stated about their original Area Polygons, “using the polygons will greatly reduce the risk of inappropriate coordinate reference system selection.  It will also minimise the risk of applying the geodetic data to inappropriate areas”.

Hopefully, with the additional processing for use in ArcGIS, the usability of the layers has been improved and they will now be even more valuable.